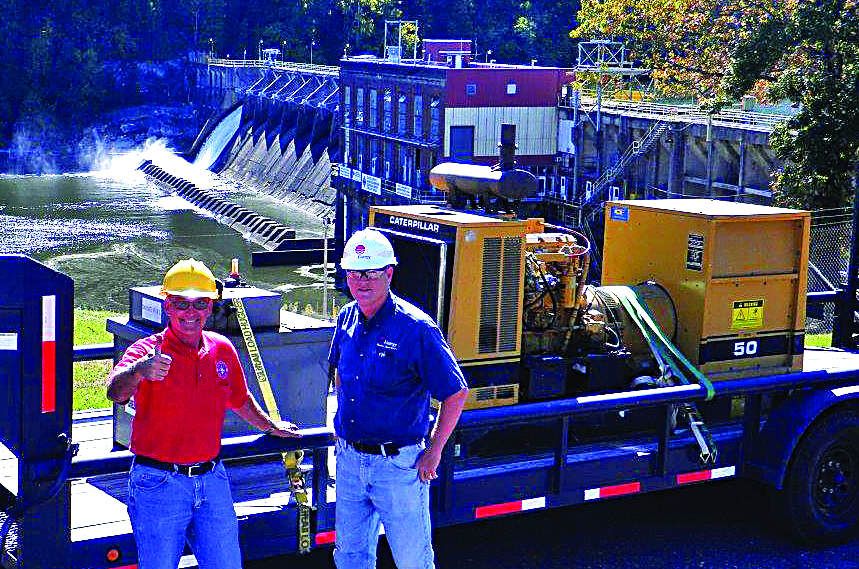 JOPLIN – What does the power company do with a spare portable electricity generator? One option is to sell it. Another is to donate it to someone who will put it to good use serving the public. For the back-up generator at historic Remmel Dam, it was Option B. And the Joplin, Ark. Volunteer Fire Department is grateful.
Ted Smethers, tech support specialist for hydro operations, explained. At both Remmel Dam and Carpenter Dam, the company must be able to open spillway gates during high-water emergencies. The gates depend on electric motors. So the company has back-up generators in place in case of a power outage. The previous generator at Remmel Dam was about 35 years old, so the company recently replaced it with a new one.
Smethers and Joplin Fire Chief Bill Barnes were visiting recently about other matters, and Barnes mentioned that one of the services his department provides the community is back-up generators for public service providers like the Montgomery County Sheriff Department, Arkansas Department of Emergency Management, nursing homes, hospitals and Red Cross shelters. Smethers said, “Well, we happen to have just replaced one. Let’s see if we can donate the old one to the Joplin VFD.”
There is a bit of red tape involved, but Smethers navigated the process without a hitch, and the Caterpillar 50 kW diesel-fueled generator, along with its fuel tank, was handed over to the fire department Oct. 13. The donation is valued at $2,000.
Barnes explained that the fire station doubles as a command center in emergencies, and its current back-up generator is an Army surplus model that is intended to be trailer-mounted while the one they’re getting from Entergy is pad-mounted. So, with the donation, the facility will have a proper permanent back-up generator in place and the more mobile one will be freed up to travel where needed.
“Being the operator of Carpenter and Remmel dams, we have long-standing relationships with the emergency response community in this part of the state,” Smethers said. “So we are thrilled to be able to enhance emergency preparedness in the Joplin and Mount Ida area. We could have sold this generator, but those of us at hydro operations feel good about donating it to the VFD. They’ll put it to good use.”
Barnes couldn’t say enough nice things about Entergy. “Your company and its people are teriffic!” He said. The Joplin VFD, he explained, is run entirely by volunteers and funded by contributions, so “that’s why the donation of this generator is so important to us. We can’t afford to buy equipment like that.”
Entergy Arkansas provides electricity to approximately 700,000 customers in 63 counties. Entergy Arkansas is a subsidiary of Entergy Corporation, an integrated energy company engaged primarily in electric power production and retail distribution operations. Entergy owns and operates power plants with approximately 30,000 megawatts of electric generating capacity, including nearly 10,000 megawatts of nuclear power, making it one of the nation’s leading nuclear generators. Entergy delivers electricity to 2.8 million utility customers in Arkansas, Louisiana, Mississippi and Texas. Entergy has annual revenues of more than $12 billion and approximately 13,000 employees.