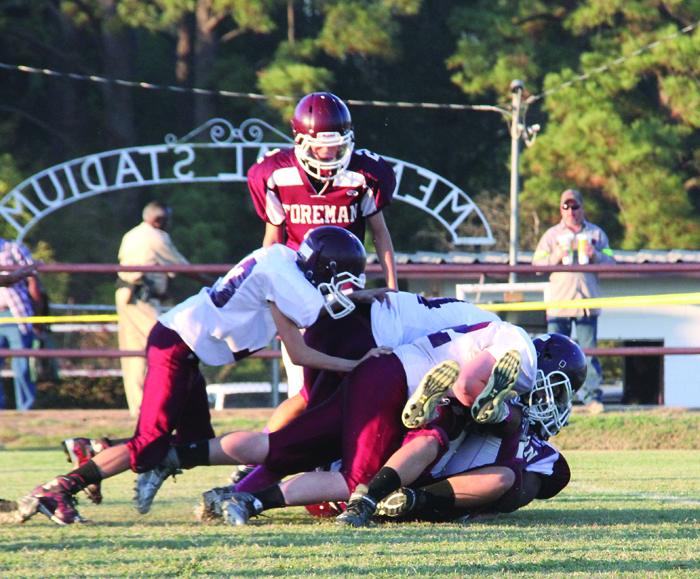 FOREMAN – Two crucial stops on two point conversion attempts were the key to victory for Mount Ida as the Junior Lions slip past Foreman 24-20 last Thursday.
The Junior Lions seize control of the conference race with the victory against a Junior Gator team that had only been scored on three times this year. Mount Ida scored three touchdowns and three two point conversions while carrying the ball 39 times for 221 yards.
Jonathan Lagrange was the workhorse for Mount Ida with 23 carries and 148 yards. He scored all three Junior Lion touchdowns and one 2 point conversion.
Gage Dyer had 12 carries for 59 yards. Cade Jackson had three carries for nine yards and two 2 point conversions. Hunter Davis had one carry for five yards.
Cade Jackson was 0-3 in pass attempts.
Foreman had 33 carries for 218 yards and three TDs. They were only successful on one of their three conversion attempts. The Junior Gators completed five of seven passes for 53 yards. They also threw for one interception.
The Junior Lions were ready to play in the opening series with three consecutive plays resulting in loss of yardage for Foreman. Mount Ida fielded the ball on their own 32 and launched a ground attack that traversed 63 yards in 11 plays. Lagrange got the majority of the touches and ended the drive with an eight yard run for a score. Jackson slipped in for the 2 point conversion to give Mount Ida an eight point lead at the 1:27 mark in the opening quarter.
Foreman was able to cross into Lion territory on their next series, but the Mount Ida defense was able to stop them on fourth and nine to take over on downs.
Mount Ida started out on the Foreman 44 yard line and methodically made their way down field to score on a two yard run by Lagrange. Jackson called his own number again on the 2 point conversion and Mount Ida held a 16-0 lead with 4:21 to go in the first half.
Foreman was able to get on the scoreboard in their next series thanks to a 51 yard run. The score capped a short three play drive. The two point conversion was good and the Junior Lion lead sat at 16-8.
Mount Ida started the second half with the ball on the Foreman 47 after Jackson fielded the ball deep in Lion territory. He lateraled the ball to Dyer who raced across midfield before being tackled.
Mount Ida only needed three plays to score with Lagrange barreling 38 yards for the score.  He stepped in for the 2 point conversion to give the Junior Lions a 24-8 lead with 6:38 to go in the third quarter.
Foreman answered with a seven play drive that went 59 yards and ended on a four yard run. The Mount Ida defense stood their ground on the two point conversion, forcing the Gators into a two score situation if they wanted to gain the lead.
Mount Ida looked as if they would add to their lead once again, moving the ball deep into Foreman territory before turning the ball over on downs on the Foreman 11 yard line.
Foreman cut the Mount Ida lead to four with a two yard touchdown run with 2:23 left in the game. The Mount Ida defense stood strong good once again to hold onto a four point lead.
The Lions failed to find the endzone again and turned the ball over on downs at their own 44 yard line with 1:11 to go in the game.
Foreman moved the ball to the 35 yard line and spiked the ball to stop the clock with 11 seconds to go. They got a first down on the 26 with five seconds to go and went to the air for the win, but Cade Jackson and Gage Dyer came down with ball in the end zone to end the game with a win for Mount Ida.
Mount Ida moves to 7-1 on the season and 5-0 in conference play. They will host Dierks Thursday with the Junior High game scheduled to kick off at 7 p.m.