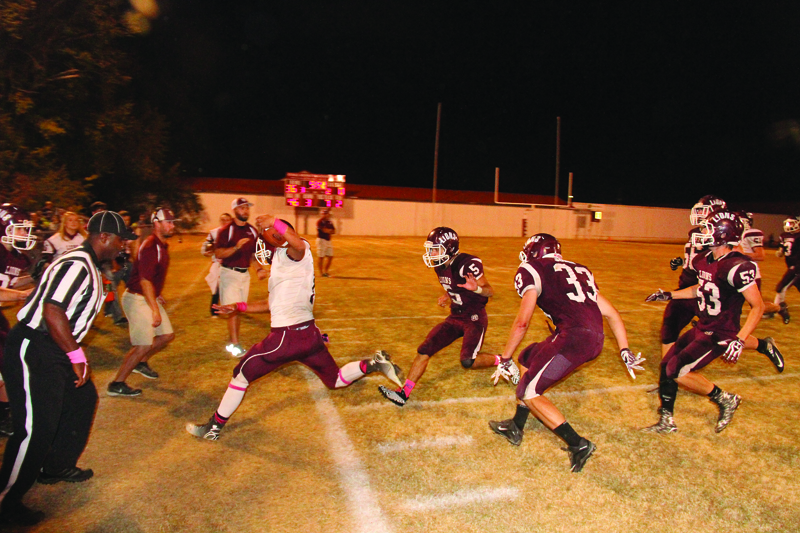 MOUNT IDA – Tyler Allenbrand hit his first field goal as a Lion to help the Lions earn a  53-0 victory over the Foreman Gators Friday night.
Mount Ida rushed for 308 yards on 29 carries while holding the Gators to only 54 yards on 28 carries. T.J. Wilson completed two of three passes for 92 yards and two touchdowns, while Foreman completed five of 19 passes for 29 yards and three interceptions.
Ten players toted the ball for Mount Ida with Jesse Lowry leading in yardage with 87 on two carries. He also had a touchdown and a 2 point conversion. T.J. Wilson had one carry for 76 yards and a score, while Cody Robertson had three touches for 36 yards for a touchdown and a 2 point conversion. Caleb Jones had two carries for 22 yards.
Trevor Fryar led the team in carries with eight for 48 yards and a score. Bridger Farmer had four carries for 17 yards, Dallas Weston had five carries for 16 yards and Joshua Hendrix had two carries for three yards. Hayden  Bishop had a carry for two yards and Cade Helms had a carry for a yard.
Lowry had a catch for 35 yards and a score and Robertson had a catch for 57 yards a touchdown.
Foreman started the game on their own 33 yard line. They were able to get a first down, but was forced to punt on fourth and 10 from their own 44.
Mount Ida needed only one play in their first possession with Wilson racing 76 yards for the first touchdown of the night. The PAT was blocked and as everyone stood around Lowry scooped the ball up and trotted into the end zone. The referees arms went into the air and Mount Ida was credited with a two point conversion. Mount Ida held an 8-0 lead with 9:41 to go in the first quarter.
Foreman got another first down on third and nine when their quarterback caught his own pass after it was swatted away by a Mount Ida lineman. He raced to the Foreman 44 yard line and a first down.
The Gators briefly crossed into Mount Ida territory, but a personal foul for a chop block pushed them back to their own 39. Cade Helms sacked the quarterback to move the line of scrimmage back nine more yards and two plays later the Gators were forced to punt.
Mount Ida started their second drive on their own 49. Lowry got the call and was tackled at the Gator 35. Wilson turned to Lowry again, this time in the air, for a 35 yard touchdown reception. Allenbrand’s PAT was good and the Lions increased their lead to 15 at the 5:21 mark of the first quarter.
Foreman started their next series on their own 30 yard line. They took to the air on their first play and Cody Robertson reached out as the ball went past him and grabbed it with one hand. He ran 35 yards for the pick six. The PAT was good and the Lions held a 22-0 lead with 5:09 to go in the opening quarter.
The next Gator series ended after four plays with a fumble recovery by Lowry at midfield.
A block in the back call against Mount Ida moved them to their own 43 yard line with second a 16 to go. Wilson rolled to his right looking for an open man and found himself surrounded by Gator defenders. He looked across the field and found Robertson open on the far side of the field. Robertson flew down the field to score with 2:32 to go in the first period. Allenbrand’s PAT was good and the Lions held a 29 point lead.
Foreman went three and out on their next series and Mount Ida took over on their own 34.  an Illegal procedure call pushed them back to their 29, but Lowry took the hand off on the next play and went the distance for fifth Mount Ida touchdown of the quarter. The PAT was good and the lead sat at 36.
Foreman entered the second quarter with the ball at midfield, but was unable to cross the Lion 45 yard line, turning the ball over on downs.
Caleb Jones carried the ball 10 yards into Gator territory and Robertson followed up with a 19 yard run. Jones answered with a 12 yard run and Robertson finished things up with a 14 yard run for a touchdown. The PAT was good and the Lion lead was 43.
The ensuing Gator drive lasted one short play and ended with an interception by Lowry who fell three yards shy of a pick six of his own. Trevor Fryar entered the game as a running back and took the ball in for the final touchdown of the night. The PAT was good and Mount Ida held a 50-0 lead with 7:44 to go in the first half.
Late in the fourth quarter Coach Mike White gave place kicker Tyler Allenbrand a chance to kick a 37 yard field goal, which fell just short of the mark. On the next series he trotted out once again, this time for a 32 yard attempt, which had more than enough to go through for his first field goal as a Mount Ida Lion.
Mount Ida moves to 7-0 on the season and they remain undefeated in conference play as they prepare to travel to Dierks Friday night. Kickoff is scheduled for 7 p.m.