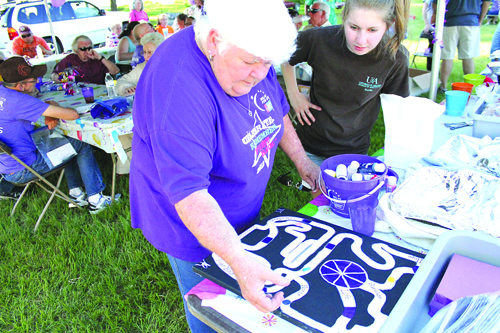 NASHVILLE – Fourteen area Relay for Life teams persevered through extreme heat at the Nashville City Park Friday to show their support for cancer survivors as well as those who have lost the battle with cancer.
Beverly Tedford, a dedicated ‘relayer’ and organizer, said her devotion to the event came from watching both her grandmother and aunt fight the horrific disease. Teford said, “They were both fabulous women.”
According to Tedford, the teams had raised about $15,000 before the event and hoped to reach up to $40,000 in total to compare to the total amount raised in 2014, which was around $40,000. “The event itself will bring in at least $5,000,” said Tedford.
The relay teams go to monthly meetings throughout the year and Tedford says that “whatever you put in [to the event and cause] is what you get out. It is well worth it. Seventy-nine cents of every dollar raised goes directly to research and programs” for aiding cancer patients.
Event chair, Joanna Howard, has held the chair position for five years and has been extremely involved in the event and cause since 2004. She said, “What motivates me to keep working is seeing people that have fought and come out winners.”
The local language arts teacher said the biggest blessing she has received from the position has been meeting inspirational people she would have never known otherwise. Howard said the event, “reminds me that I live in a town full of people with amazing stories.”
One of the many survivors who came to support the cause was Diane Bean. The 59 year old local woman has been breast cancer free for three years now. Bean urges all women to get yearly mammograms and do home exams no matter how uncomfortable it may be. She said one good thing about being a breast cancer survivor is that she “will never have another mammogram again.”
Although Bean has had a rough journey throughout the years working to beat the sickness, she says she realizes, “I get up every morning and I go to bed every night and some people don’t get to do that. I have God and I have family, which are two things important to all survivors. If we have these two things, we have everything we need.”
Another survivor, Brittney Gilbert, showed her brave, young face at the event. A few days before Gilbert’s third Christmas, she was diagnosed with Leukemia; she was already at stage 3. Her mother, Kristy Nation, said there was one night in particular when she did not think her baby was going to make it. It was New Years and she ran fever of up to 107 degrees. The doctor told Nation that she may want to call the family in to say their ‘goodbyes’ to the little girl.
Today, Gilbert is 19 years old and has just graduated from EMT school. She said she comes to the event every year because she wants to “influence others not to give up and it means a lot to her to see others who have been through the same struggle and have overcome it.”
Donna Mounts is the team leader of “Life is Good,” dedicated to the memory of Bill Fritts. Mounts said, “Bill was a courageous fighter and one of the most compassionate, generous, and honest people she has ever known.” Even though Bill was fighting for his life, he would still “sit on the front porch watching the sun set and talk about how good life was,” said Mounts.
“Bill was the kind of man who loved those who had nothing to give him in return other than love. Bill is my hero,” said the loyal team leader. Mounts also said, “Morgan Tucker, age 10, was Bill’s little princess and always will be.”
Unfortunately, Tucker is one of many who has lost a loved one at the hands of cancer. Almost every person casually walking by at the event had lost a friend or loved one from the ailment or is a survivor or current fighter. This event is one of few in which every person in attendance is a brave and devoted fighter, whether they have fought the fight themselves or have stood by someone’s side and helped them fight.
Joanna Howard said the event is always one of her favorite nights of the year because it puts a face on cancer and those faces are often faces of friends and family who are coming together to support and help one another.