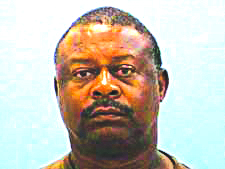 NASHVILLE – An Ozan man accused of killing a local woman last summer was sentenced to over 50 years in the Arkansas Department of Correction Wednesday in Howard County Circuit Court.
Gary Swift, 50, received the sentence after entering guilty pleas to charges of first degree murder, committing a terrorist act and possession of firearms by certain persons stemming from the June 21, 2014 shooting death of Pam Harris. He received a 40 year term on the murder charge, five years on the firearm charge set to run concurrent with the 40 year sentence, and 10 years with five suspended resulting from the terroristic act allegations.
According to court documents, multiple witnesses at the scene of the shooting identified Swift as the responsible party, saying he shot the victim while she was sitting inside her vehicle. Officers found Harris unresponsive in a maroon Chevrolet SUV in a yard near the Tyson Foods building on S. Main St., where the vehicle had struck a garage post, causing the roof to fall onto the windshield of the vehicle.
“One witness stated that [Harris] was sitting beside her when [Swift] drove up in his truck. The witness told her she better leave, and Pam went and got into her vehicle,” police wrote in the arrest affidavit attached to Swift’s case file. “The witness stated that [Swift] got out of his truck and opened the tool box. [Swift] then began walking toward Pam’s vehicle … carrying a bad and a pistol.”
The affidavit further alleges that Swift told Harris he was going to kill her before firing the pistol “several times” while reaching inside the window. Swift then fled the scene and was later arrested in Clow, according to the affidavit, which goes on to allege that he admitted to the murder during a subsequent interview with law enforcement.