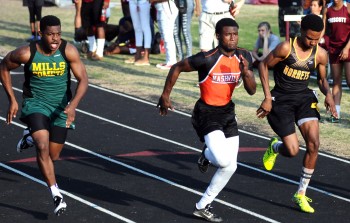 PRESCOTT – Howard County track and field athletes had a banner day Thursday as the Nashville Scrappers claimed the Merchant Relays title and a Mineral Springs Lady Hornet set a meet record.
Nashville claimed victory with 125.5 total points, well ahead of the host team, who finished second with 103.5. But it was Briara Sanders who stole the spotlight at the event, single-handedly lifting her team to a fifth place finish in the women’s division despite being the only competitor representing Mineral Springs.
Sanders shattered the meet record in the triple jump with a 35’11” performance, took second in the long jump with a 16’8” effort and claimed a trio of third place ribbons in the 100m dash, 300m low hurdles and high jump. She also finished fourth in the 110m hurdles, completing the race in 18.33.
The Scrappers were less dominant individually, winning just three events, but piled on other top-three finishes to eke out the overall win. Sam Cogburn won the 300m hurdles for the Scrappers with a 43.58 finish, LaMichael Pettway took top honors in the triple jump with a 43’4” performance and Nashville’s 4x800m relay team, composed of Ignacio Perez, Zach Jamison, Jordan Williams and Robbie Morphew, were dominant in their race with a 9:03.66 win.