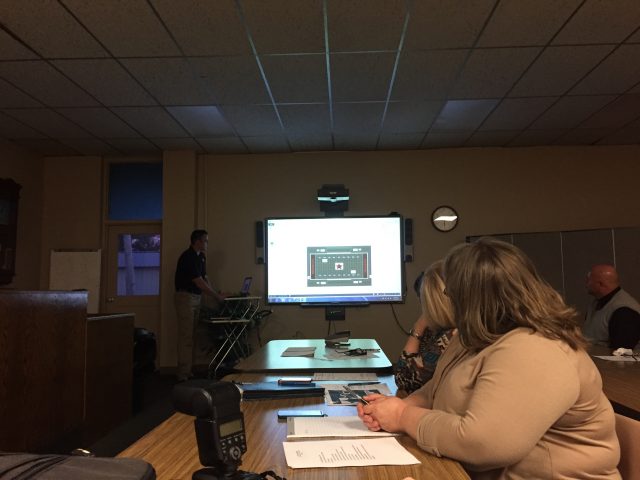 The Nashville School District is considering the possibility of installing artificial turf at Scrapper Stadium if a fund-raising program collects enough money for the project.

Superintendent Doug Graham told the Nashville School Board Feb. 16 that he wants school patrons “to know about it” when athletic department officials are out talking to prospective donors.

“Can we pull it off? I don’t know. When we see the results of the fund-raising, we’ll try to sit down and get our thoughts on it,” Graham said.

No school district funds will be used for the turf, and there will not be a millage increase. The entire project will be financed through donations, Graham and Coach Mike Volarvich told the board.

Volarvich presented “Laying Down the Green in 2016 – Nashville Turf Installment Plan” during the board meeting. “The purpose is to secure funds in 2016 to lay down synthetic grass at Scrapper Stadium benefiting the school and the community,” Volarvich said.

The current field is not level and has improper drainage, according to Volarvich. It’s costly to maintain and prepare for games, he said.

In addition, “The field cannot withstand the additional events it is intended for,” such as band practices, pee wee grade football, school use, p.e. classes, potential soccer, playoffs and other activities.

Volarvich compared the upkeep for turf and the upkeep for a grass field. Total time during the summer and football season to maintain turf is about 20 hours, Volarvich said, including optional sweeping once a month at one hour per sweep.

Grass, he said, requires 150 hours during the summer and season, including mowing, lining the field, weed-eating and spraying for weeds. It also requires watering.

Volarvich said turf would benefit the band by allowing Nashville to host competitions. Currently, all of the marching contests which the band attends are held on artificial turf, he said.

The band would be able to practice on the game field, resulting in quality pre-season and off-season practice.

Cheerleaders would have increased field practice time, Volarvich said. “They will get to actually practice where they will perform.” They will also be able to host camps.

The approximate cost of the project is $650,000, Volarvich said. That includes installing turf everywhere inside the track.

The program also includes individuals and other businesses “for smaller sponsorships, but would not include their logo on the turf,” Volarvich said.

Donations may be paid annually over a multi-year period, he said. “They pay off over a 10-year period at a lot of schools.”

The fund-raising effort is underway through May 1.

If the campaign is successful, installation would begin by July 1 and take about 30 days, Volarvich said.

Graham said turf would be useful for p.e., band and sports such as baseball and softball. It would make the stadium available for events other than football, he said. “We have to decide if we use the stadium 10 days a year or use it year-round. We need a better place for the band to practice. Hosting state events brings excitement” for band, cheerleading and other activities.

Graham said the board will receive an update on the fund-raising program at a later meeting.

Volarvich was joined by members of the coaching staff and band director Sarah Jo Morris for the presentation.