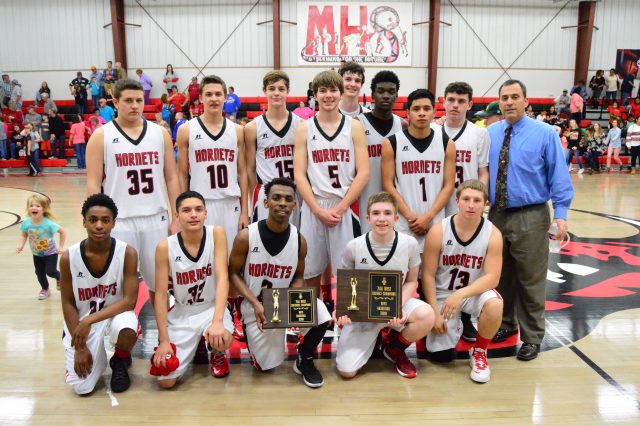 The Blevins Hornets secured the 7-2A West District championship Friday night with a 60-42 win over the Mineral Springs Hornets.

The Blevins boys pushed through the tournament with a 67-43 win over the Dierks Outlaws in the semifinals and the 60-42 win over the MS Hornets in the championship game.

The Mineral Springs Lady Hornets also advanced to regional play and will take on Junction City Thursday at 7:00.

In the boys’ championship game, the two Hornet teams opened the game with an even first quarter and Blevins holding a slight 19-16 lead over the Mineral Springs. In the second quarter, the MS Hornets’ offense slowed despite the efforts of KeShaun Davis, who hit 17 of his team’s 22 first-half points and Blevins held on to a 31-22 lead at the half.

Mineral Springs came out firing in the second half with Davis putting in 14 points in the third period. But Blevins, behind 3 shooters in double-figures, advanced their lead to 45-40.

Mineral Springs’ offense was all but shut down in the fourth quarter, managing only 2 points while Blevins whipped in 15 more for the 60-42 final.

Blevins scorers included Ivan Gomez and Trevon Reed with 15 points each, Damion Young with 14 and Noah Yingst and Seth Henry Kirkham with 8 points each.

Mineral Springs was led by Davis with 33 points followed by Tre Lacy with 4, Levin Thornton with 3 and Camron Perkins with 2.