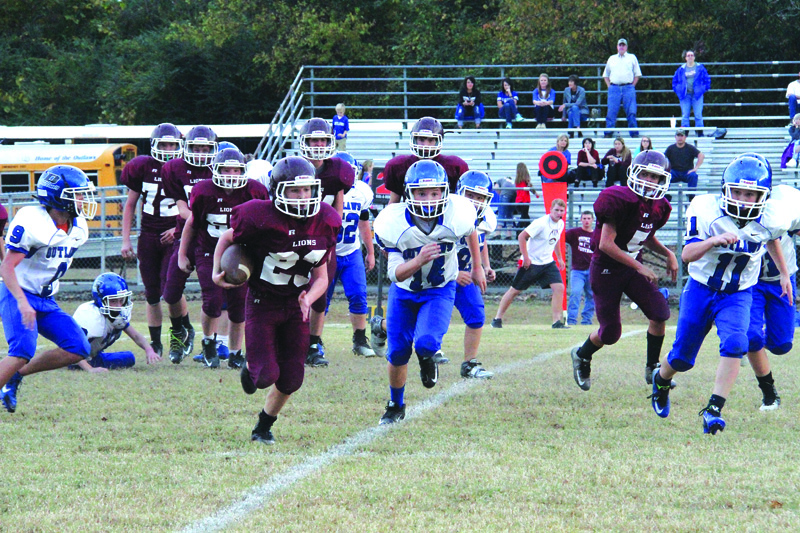 MOUNT IDA – The Mount Ida seventh graders spoiled Dierks’s trip to town with a 16-6 victory over the Outlaws.
Dierks won the battle in the stat book, amassing 101 yards on the ground with 15 carries and 3-7 in the air for 63 yards for a total of 174 yards. Mount Ida had 18 carries for 148 yards and they were 0-3 in the air.
Dierks jumped out front in the first half with a 6-0 lead four minutes into the game. They drove 68 yards in six plays before Kaden Helms punched it in from two yards out. The 2 point conversion attempt fell short and Mount Ida took over on their own 30 yard line.
Austin Cooper took most of the carries as the Lions moved the ball to the Outlaw 20 yard line. On third and five Hunter Davis got the call and he raced 20 yards for the score. Cooper took the ball in to the end zone on the 2 point conversion attempt and Mount Ida led 8-6 with 5:33 left in the half.
In the second half both teams struggled to move the ball in their first series, but Mount Ida was able to get things moving down field in their second drive of the half. Cooper and Hunter Davis worked in tandem as they moved the ball to the Outlaw 13. Seth Standridge moved the ball to the five and Johnny Dyer finished things off with 5:11 to go in the game with a five yard run. Cooper scored on the 2 point conversion to increase the Mount Ida lead to 16-6.