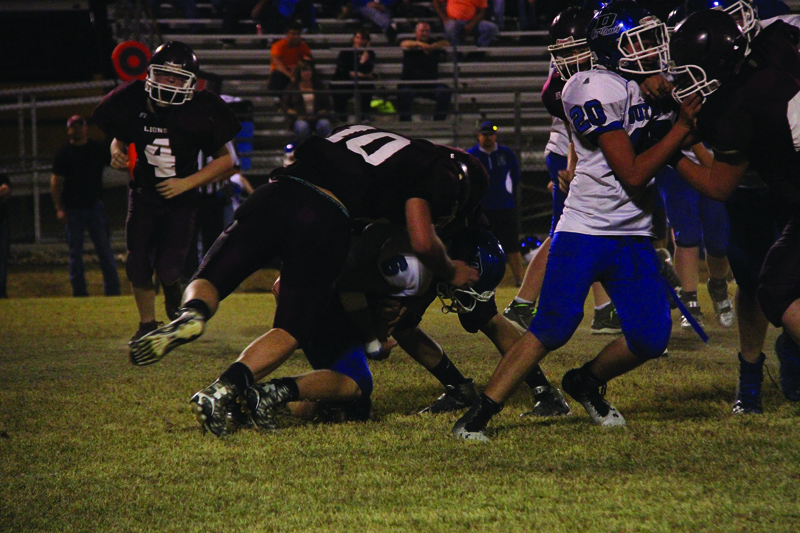 MOUNT IDA – The Mount Ida Junior Lions rushed for just over 140 yards and Cade Jackson threw for nearly 200 as they beat the visiting Dierks Junior Outlaws 38-0.
Jonathan Lagrange averaged 13 yards a carry with five touches for 65 yards. He scored two touchdowns and a two point conversion in the win.
Gage Dyer had three carries for seven yards and a 2 point conversion, but he made his mark in the game as a receiver, catching four of Cade Jackson’s five completions for 190 yards and two touchdowns.
Cade Jackson was 5-8 in the air for 195 yards, three touchdowns and an interception. He also had a carry for 40 yards.
Nine other Lions contributed on the ground.
Hunter Davis had a touch for three yards and a 2 point conversion, as did Luke Fiorello.
Jorge Lopez had two carries for six yards, Jathan Dillon had two carries for four yards and Tyler Hamilton had two carries for a yard.
Austin Cooper had a carry for two yards and Seth Standridge had one for three. Johnny Dyer also had a touch.

Chandler Lowrey led the Junior Outlaws with 11 carries for 18 yards. He was also 5-7 in the air for 50 yards.
Jace Jackson had eight carries for 15 yards and John Cothren had three carries for seven yards. Lane Tabler had a carry as well.
Jace Jackson led Dierks in receptions with four for 51 yards. John Cothren had a reception.
Dierks opened the game with the ball on their own 21 yard line and turned the ball over on downs after failing to convert on fourth and three from their own 28.
Mount Ida only needed one play to find the end zone with Coach Mike White calling Jonathan Lagrange’s number on first and 10 from the 25. Lagrange went the distance to score with 5:43 to go in the first quarter. He got the ensuing carry to score on the 2 point conversion to give Mount Ida an eight point lead.
Dierks was able to convert on a fourth and four thanks to a six yard reception by Jace Jackson, but they were force to punt after gaining only two more yards.
Mount Ida started their second series on their own 43. They quickly moved across midfield with a run from Dyer. Three plays later Cade Jackson sprinted 40 yards to the three yard line before being brought down. Lagrange finished things up with a three yard touchdown run. Hunter Davis got the call on the 2 point conversion and Mount Ida’s lead was now 16-0 with 13 seconds left in the opening quarter.
The Junior Outlaw offense was stymied and they were forced to punt on a fourth and 14 from  their own 38. Dyer returned the punt for a touchdown, but it was called back to the Lion 48 due to a block in the back flag.
The Junior Lions only needed one play again to score with Cade Jackson and Gage Dyer connecting for a 52 yard touchdown reception. The 2 point conversion came up short and the Junior Lions held a 22-0 lead with 6:01 left in the first half.
Dierks was forced to punt again, but an interception gave them new life on their own 28 yard line.
Chandler Lowrey raced to the 48 for a first down, but the Junior Lions held the Outlaws out of their side of the field, forcing a punt from the 48.
Mount Ida went into their hurry up offense with just over a minute to go in the half. They marched 75 yards in seven plays to score on a five yard pass to Jathan Dillon with 17 seconds to spare. Dyer scored on the 2 point conversion to give the Junior Lions a 30-0 lead at the half.
Dierks opened the second half with the ball after recovering a fumble on an onside kick on their own 49 yard line.A pass to Jace Jackson placed them nine yards from the end zone, but Jonathan Lagrange recovered a fumble to end the drive. Cade Jackson and Gage Dyer collaborated on a 92 yard touchdown reception to account for the final touchdown of the game. Luke Fiorello scored on the 2 point conversion to lift the Mount Ida lead to 38.
Mount Ida moves to 8-1 on the season and 6-0 in conference play. They will travel to Gurdon to end the season Thursday. Kickoff for the junior high game will be at 7 p.m.