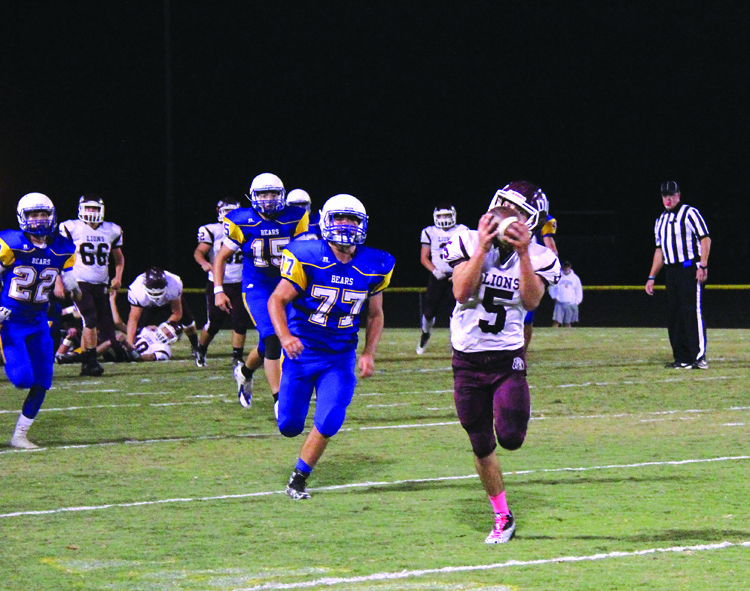 SPRING HILL – The tandem of Jesse Lowry and T.J. Wilson combined for four touchdowns in the air as the Mount Ida Lions routed the Spring Hill Bears 41-0 last Friday.
The Lion defense got in on the aerial assault as well, with four different Mount Ida players coming down with interceptions.
Mount Ida was 5-8 in the air for 229 yards and four touchdowns, all by Lowry. The Lions also had 28 carries for 141 yards and two scores. Tyler Allenbrand was 6-7 on PAT attempts with one blocked kick.
Cody Robertson led the ground game with eight carries for 69 yards and a touchdown, followed by Caleb Jones with nine carries for 34 yards and a score.
Jesse Lowry had two carries for 31 yards, Cade Helms had a touch for six yards and Trevor Fryar had four carries for two yards. Bridger Farmer and Dallas Weston each had a carry.
The Mount Ida defense held Spring Hill to 110 yards on the ground. The Bears were 2-9 in the air for 28 yards and four interceptions. Michael Kesterson, T.J. Wilson, Jesse Lowry and Bridger Farmer each had a pick.
Spring Hill opened the game with the ball on their own 25 yard line. They were able to move the ball to the 44 before the ball changed hands on a fumble.
Mount Ida started the drive on the Spring Hill 42 and Robertson carried the ball five yards on his first touch. Wilson dropped back into the pocket on the next play and hit Lowry on the run for a 37 yard TD reception. The PAT by Allenbrand was good and the Lions led 7-0 at the 8:14 mark in the first quarter.
Spring Hill leaned heavily on running back Jacob Crow as they pushed their way to the Lion 39 yard line. On fourth and 12 they took to the air and Michael Kesterson stepped in front of the pass for the interception. He fought his way to the Mount Ida 48 yard line before being brought down.
The Lions moved into Bear territory with runs by Robertson and Jones. The tandem of Wilson and Lowry connected for a 39 yard touchdown reception on first and 10 with 1:51 to go in the first quarter. The PAT was good and the Lions led 14-0.
Spring Hill started their next series on their own 48 and quickly moved into Lion territory. In the early seconds of the second quarter Spring Hill found themselves in a fourth and eight situation from the Lion 36. Once again they took to the air and this time it was Wilson who came down with the ball on the Mount Ida 32 yard line.
Mount Ida marched downfield and ended a nine play 68 yard drive with an eight yard touchdown run by Robertson. Allenbrand’s PAT was good. Mount Ida led 21-0 with 8:25 to go in the half.
The Bears once again were able to move the ball across the midfield stripe, but Mount Ida was able to stop the drive on their own 33 yard line with a tackle by Gunner Gilbert on fourth and eight.
Mount Ida found themselves on their own 18 yard line and in a third and 25 situation when Wilson launched the ball deep to Lowry who went the distance untouched for the score. The PAT was good and the Lion lead increased to 28 with 1:34 to go in the half.
The Lion defense was fruitful once again, this time it was Lowry coming down with the interception on the Bear 48 yard line.
Mount Ida tried to add to their lead as the half wound down, but was unable to score before the horn sounded.
Spring Hill kicked away from Lowry to open the second half, but Wilson fielded the ball and latereled to him. Lowry was able to make it to the Lion 43 before running into a pile.
Robertson moved the ball across midfield and two plays later Wilson found Lowry open once again for a 44 yard TD reception. Allenbrand’s PAT was good and the sportsmanship rule kicked in at the 10:39 mark with a score of 35-0.
Jones was the last to score with a two yard run. Spring Hill was able to sneak a defender around the corner to block the PAT. The Lions went on to win the game 41-0.
Coach Mike White was pleased with the win. He said the Lions were able to take advantage of some mismatches which allowed Wilson to throw the ball more than normal.
Mount Ida remains undefeated on the season with a record of 6-0 and 3-0 in conference play. They will host the Foreman Gators Friday night with kickoff scheduled for 7 p.m.