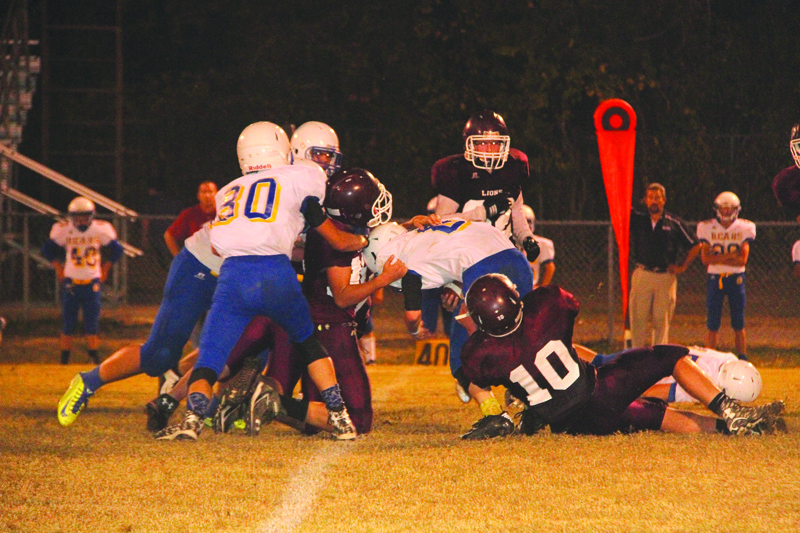 MOUNT IDA – The Mount Ida Junior Lions continue to roll through the conference with a 40-0 victory over the Spring Hill Junior Bears.
The Junior Lions rushed for 222 yards on 25 carries with Gage Dyer leading the team with five carries for 120 yards and two touchdowns.
Jonathan Lagrange was next with four carries for 76 yards, two TDs and a 2 point conversion. Hunter Davis had four carries for nine yards and two 2 point conversions. Cade Jackson and Luke Fiorello each had a 2 point conversion.
Austin Cooper had two carries for 11 yards, Seth Standridge had two for four, Nathan Stonewall had a touch for three yards. Jathan Dillon and Fisher Davis also had three touches and one respectively.
The Junior Lions held the Bears to negative 24 yards of offense and intercepted four of the Bears’ six passes on the night. Cade Jackson took one 80 yards for a touchdown.
Mount Ida started the game on defense with Spring Hill on their own 31. The Bears quickly moved into Junior Lion territory, but a fumble recovery by Jonathan Lagrange put the ball into Mount Ida’s hands on their own 40 yard line.
Mount Ida looked as if they might give the ball right back with a fumbled hand off on the first play of their opening drive, but Gage Dyer scooped up the ball and raced 60 yards down the visitor’s sideline for the score. Hunter Davis went in for the 2 point conversion to give the Junior Lions an early eight point lead with 3:50 left in the first quarter.
Spring Hill almost answered with a score on the ensuing kickoff, but the Junior Lions knocked the return man out of bounds just inside the Mount Ida 10 yard line. A holding penalty pushed Spring Hill back to the 19. The Bears took to the air and Gage Dyer plucked the ball out of the air on the 10 yard line and weaved his way to the 34 before being brought down.
Mount Ida only needed one play again to score with Dyer racing 66 yards for the score with 58 seconds left in the opening period. Lagrange took the 2 point conversion in to give the Junior Lions a 16-0 lead.
Midway through the second quarter Spring Hill took possession on their own 32. On third and 17 Jackson intercepted a pass on the Spring Hill 14 yard line. One play later the Lagrange blasted through the Bear defense and went the distance.  Jackson scored on the 2 point conversion and Mount Ida held a 24-0 lead with 2:05 to go in the first half.
A personal foul against Mount Ida put the Bears into Junior Lion territory, but Cade Jackson ended their scoring hopes with an interception on the Mount Ida 20 yard line. He ran 80 yards for the touchdown and Luke Fiorello followed up with the 2 point conversion to give Mount Ida a 32-0 lead at the half.
Mount Ida opened the second half with the ball on the Spring Hill 49 after an onside kick attempt. Dyer moved the ball to the 44 before Lagrange broke loose for a 44 yard touchdown run. Hunter Davis scored on the 2 point conversion to give the Junior Lions a 40-0 lead.
Coach Mike White turned the game over to his bench and they were able to preserve the shutout.
Mount Ida moves to 6-1 on the season and 4-0 in conference play. The Junior Lions will travel to Foreman Thursday with kickoff scheduled for 6 p.m. There will not be a seventh grade game.