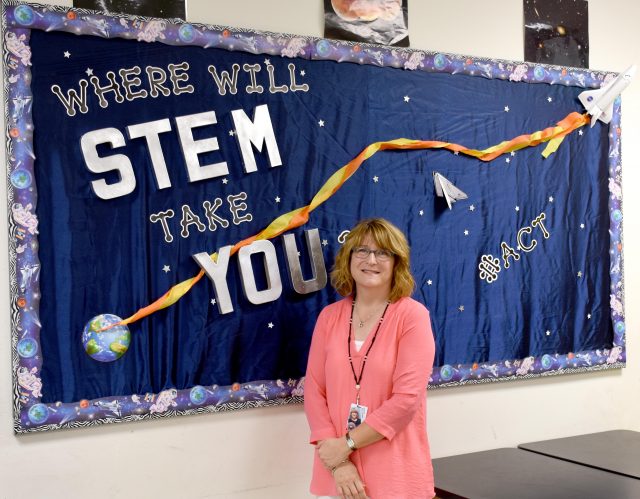 Brenda Galliher, eighth grade science teacher at Nashville Junior High School, has been named one of four finalists for Arkansas Teacher of the Year.

She and the other finalists were selected from 16 regional finalists announced last week.

The regional finalists from throughout the state were recognized Sept. 17 in Little Rock at the Old Supreme Court Room in the Capitol. During the ceremony, the top four finalists were announced.

Each regional finalist will receive a $1,000 award from the Walton Family Foundation.

The top four finalists will be evaluated, and the Arkansas Teacher of the Year will be announced later this fall.

“I’m very pleased to have made it this far,” Galliher said.

Galliher is in her 11th year in the Nashville School District. “I’ve been here longer than any other place,” she said. Her parents were missionaries, and she grew up in the Congo.

She received her bachelor’s degree in forestry from Purdue University and her MBA from the University of Indiana.

Galliher moved to Nashville when her husband was transferred on his job. “I wasn’t a licensed teacher when I came here. I had worked in the financial world,” she said.

“The good Lord knew he wanted me to be a teacher. The science classroom was my calling. I received my license in 2004 and taught math for a while.”

She taught at Ashdown before accepting a job at NJHS, where she taught eighth grade math and algebra before moving to science, where she has been for five years.

“I’ve always had a love for science. My father was an aeronautical engineer for the Apollo program before he became a missionary. I remember sitting in his lab watching him work,” Galliher said.

As a teacher, “I love being able to show the created universe. It reveals the glory of God to me. I get to share it with my students.”

Galliher said that when she started teaching, “I had to learn that not all people share the passion for science that I have. Science and faith have always been one for me. It’s part of my mission to sow that they are not diametrically opposed to each other.”

Teaching at NJHS is “a good job to come to every day,” Galliher said.

The Teacher of the Year journey began when NJHS Principal Deb Tackett asked Galliher to apply. “It’s a long process of writing. You have to think about why you do the things you do,, where you want the classroom to go, how to translate it to a global scale.”

Galliher was asked about her philosophy of education and about important issues in education. She also was required to develop a platform. Hers deals with the importance of STEM – Science, Technology, Engineering and Mathematics.

“I told about the future of STEM education for our future in Arkansas and our responsibility to promote it whether we teach STEM or now,” Galliher said.

“We face a lot of challenges in the next 50 years. Science and technology are a big part. Arkansas needs to be on the front line.”

Along with her teaching duties, Galliher is a founder of the NJHS Science Club with science teacher Carol Hendrix. The organization has almost 50 students in it.

Away from school, Galliher said her life focuses on church and family. She also enjoys traveling. “I love geology vacations,” she said.