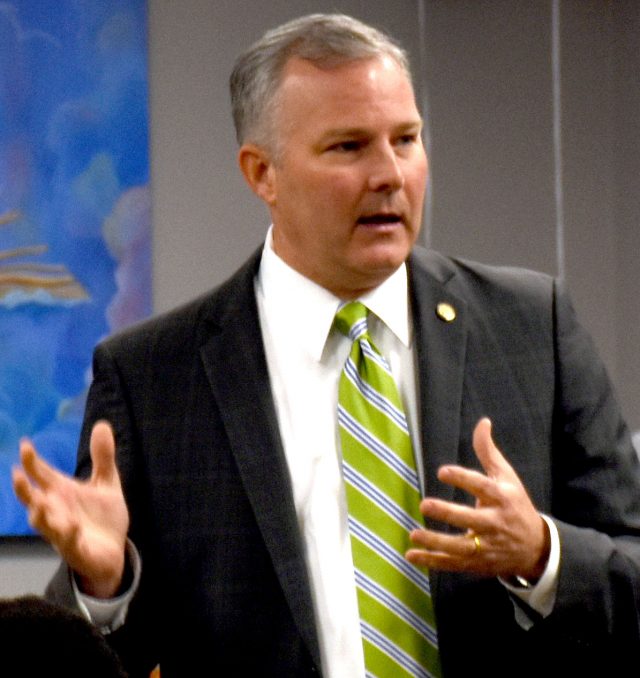 Three elected officials visited Nashville Junior High School Sept. 10 as part of Take a Legislator to School, an initiative which the Arkansas Legislature adopted in its session earlier this year.

Lt. Gov. Tim Griffin, State Sen. Larry Teague of Nashville and State Rep. Justin Gonzales of Okolona met a group of students and teachers from all four campuses of the Nashville School District. They made opening comments, then fielded questions from the students.

Griffin said he learned to appreciate books because he “loved the library at Magnolia Junior High. I would look things up. I spent time reading and learning through books,” he told the gathering at the NJHS media center.

Griffin told the students that there is “no replacement for hard work. I’ve seen people with half the advantages of others who worked hard and wound up on top. People who work hard get up earlier, go to bed later, take 10-minute breaks, not an hour.”

In 1996, Griffin enlisted in the Army Reserves and is still a lieutenant colonel. “The military isn’t for everybody, but it was one of the best decisions of my life. It doesn’t interfere. It’s extra money. I’m serving my country and getting paid,” he said.

“There’s no magic button for success. Just work hard. There’s no part of the country that can’t achieve. Look at President Bill Clinton and others. We have huge opportunities in this country. Start today. Do your homework. Act responsibly. Whatever your dream is, go from this room and achieve it,” Griffin said.

Teague chose a lighter tone in his comments to the students. “We have advantages because we’re Scrappers. We expect to win. I was a terrible student, but I liked to read. I was banned from the junior high library. I read all the books in the library standing in the aisle in study hall. I love science fiction and fantasy. Harry Potter. I read anything. Mostly I read to escape.”

As a senator, “I read lots of legislation, lots of bills, lots of junk,” Teague said.

Teague told the students that “what you do here is important. Most important is the church, the Lord and your family. We need an educated workforce. There are jobs with a good living that will let your raise your family.”

Gonzales said he “started with nothing. I never saw myself in this position. There are seats at the Capitol for people just like you.”

After Griffin and Gonzales told the students to work hard and look at successful people, Teague reminded them to “have fun” along the way as well.

As students consider possible careers, Teague told them that his son received a degree in writing but couldn’t get a steady job. “Now, he works for Blue Cross. He taught himself computers. You don’t have to live with a decision forever. You can change. Blue Cross is sending him to UALR now. Your whole life is about learning.”