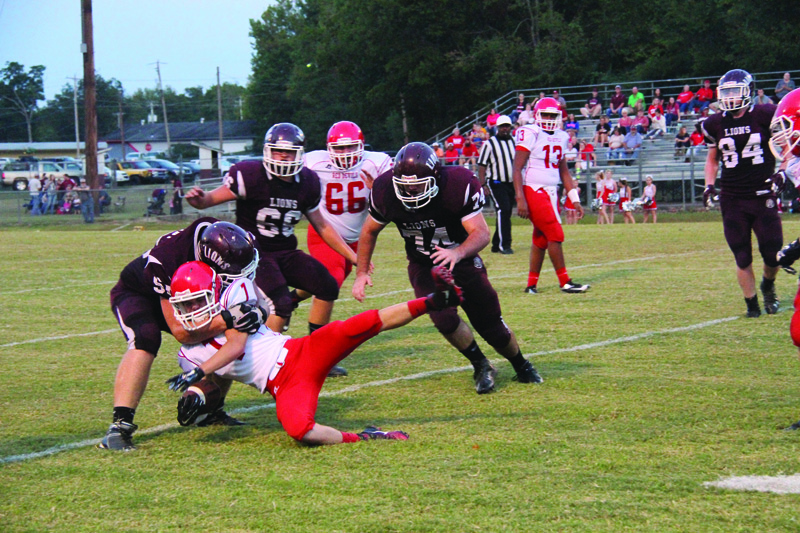 MOUNT IDA – Low numbers on the visitor’s side and aggressive play from the home team brought an early end to homecoming night with the Mount Ida Lions defeating the Mountain Pine Red Devils 56-0 in a game that was called at halftime.
The Lions dominated the game from the opening kickoff, scoring six times in the opening quarter. Mount Ida amassed 347 yards in the first half with T.J. Wilson rushing for 99 yards and two touchdowns on two carries. He also was 4-8 in the air for 83 yards and a touchdown pass to Cody Robertson.
Austin Hickman had three carries for 26 yards and a score, Jesse Lowry had a carry for 25 yards and a touchdown, Robertson had two carries for 13 yards and a score, and Caleb Jones had a carry for 29 yards. Cade Helms had three carries for 43 yards and a score, Trevor Fryar had four carries for 27 yards and Dallas Weston had a carry for two yards.
Tyler Aldenbrand was 8-8 in extra point attempts and handled the kick off duties.
The Red Devils were held to 47 yards in the half of play with no positive yards on the ground.
Anthony Spurling led the team with three tackles for loss. Bridger Farmer had three tackles as well.
Logan Abernathy had three tackles for loss, two assists and a sack. Jesse Lowry had two tackles and two assists.
T.J. Wilson and Austin McAdoo each recorded an interception and Cody Robertson and Josh Hendrix each recovered a fumble.
Mountain Pine started the game with the ball on their own 24 yard line, but turned the ball over on downs at the 10:28 mark of the first quarter. The Lions quickly moved the ball inside the ten and Cody Robertson scored the first touchdown of the game on a nine yard run with 9:02 left in the opening quarter. Allenbrand’s PAT was good and the Lions led 7-0.
The Red Devils moved the ball to their own 44 before Spurling sacked the quarterback on fourth and three to end the series.
Caleb Jones moved the ball to the 11 yard line and Austin Hickman finished the job with an 11 yard touchdown run. The PAT was good and the Lions led 14-0 with 6:35 to go in the first period.
Mountain Pine fumbled the ball on the ensuing kickoff and Josh Hendrix recovered for Mount Ida on the Red Devil 32 yard line.
Mount Ida moved the ball to the four on back to back receptions to Jesse Lowry and Anthony Spurling. T.J. Wilson finished the drive with a four yard run with 6:04 left in the quarter. The PAT was good and the Mount Ida lead was 21-0.
Mountain Pine looked as if they might score in the following series when a half back pass got past the Mount Ida defense to the Lion 22 yard line. Mount Ida’s defense tightened up and regained the ball on their own five thanks to an interception by Austin McAdoo.
The Lions only needed one play to find the end zone once again with Wilson racing 95 yards to score with 4:14 to go in the opening quarter. The PAT was good.
A pass interference play gave the Red Devils a first down on their next series, but an interception by Wilson ended their hopes of a score. Wilson plucked the ball out of the air on the 40 yard line and turned the interception into a pick six. The PAT was good and the Lions led 35-0.
The Red Devils took the ensuing kickoff deep into Lion territory, but Anthony Spurling recovered a fumble to give the Lions possession.
Three plays later Wilson and Robertson connected for a 34 yard reception touchdown. The PAT was good to give Mount Ida a 42-0 lead with 59 seconds left in the quarter.
Mount Ida regained possession at the 10:49 mark in the second quarter and scored on their first play of the period when Lowry raced 25 yards for the score. The PAT was good and the Lions lead was at 49-0.
Mount Ida’s final score came at the 2:08 mark in the second quarter on a 21 yard run by Cade Helms. The PAT was good and the Lion lead was 56-0.
The Red Devils fielded the kickoff with only nine men on the field and then took a knee on four consecutive plays to run out the clock to end the half. Mountain Pine Coach David Jordan approached the officials and told them they were going to forfeit due to injuries. Reports state that they only had nine healthy players at the end of the half.
Mount Ida moves to 3-0 with the win and prepares to enter conference play next week with a trip to Mineral Springs Friday, October 2. Kickoff is scheduled for 7 p.m.