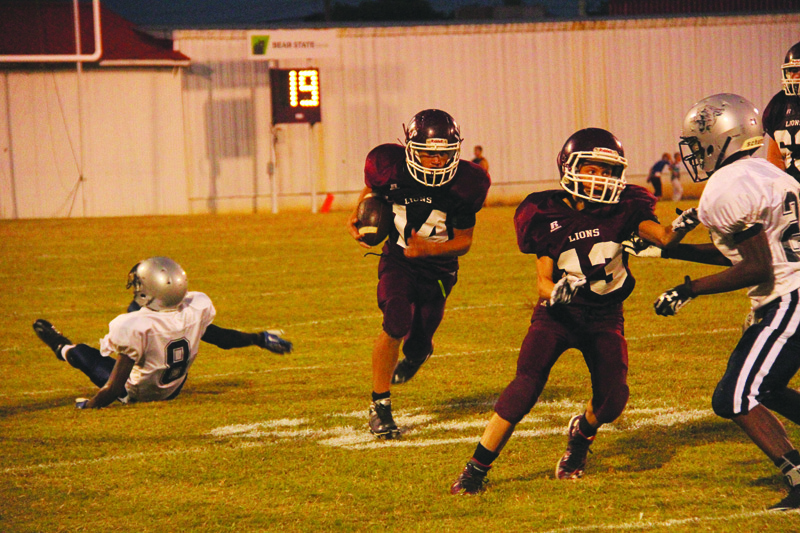 MOUNT IDA – The Mount Ida Junior Lions opened conference play with an impressive 52-6 victory over the Lafayette County Junior Cougars.
The Junior Lions came out of the locker room full speed with a 64 yard seven play opening drive that ended with a 17 yard run by Gage Dyer. Jonathan LaGrange carried the two point conversion in to give the Junior Lions an 8-0 lead with 5:25 to go in the first quarter.
Penalties put the Cougars at a first and 25 from their own 34. Quarterback Martavious Miller found his way to the Mount Ida 39 for a first down. Penalties and a sack by Oscar Pinedo and Jorge Lopez forced the Cougars to punt.
Lafayette County regained possession on a fumble, but the Junior Lions regained possession on an interception by Colton Yates. Two plays later Yates carried the ball into the end zone from six yards out for a score. LaGrange carried the ball in for the two point conversion and the Lion lead sat at 16 with 6:30 to go in the half.
A sack by Drew Allen forced another Cougar punt, which Gage Dyer took 40 yards for the touchdown to give the Lions a 22-0 lead with 3:01 to go in the first half.
Lafayette County answered with a  58 yard kick off return by Andreus Dedner for the lone Lafayette County touchdown on the night.
The Lions’ final score of the half came at the 49 second mark when quarterback Cade Jackson scampered nine yards for the score. Yates punched across the goal line for the two point conversion to give the Junior Lions a 30-6 lead at the half.
Mount Ida’s first score of the second half came at the 5:18 mark in the third quarter. Dyer caught a punt on the Lion 32 yard line and went the distance for the score. Yates got the call on the two point conversion and Mount Ida’s lead increased to 38-6.
Dyer scored again with 53 seconds left in the third on a 14 yard pass from Jackson. Jackson and Yates connected for the two point conversion to give the Lions a 46-6 lead.
The final score of the night came with a minute to go in the game on a one yard run by Ty Abernathy.
Mount Ida will host Mineral Springs Thursday night with the seventh graders starting at 5:30 p.m. and the Junior High kicking off at 7 p.m.