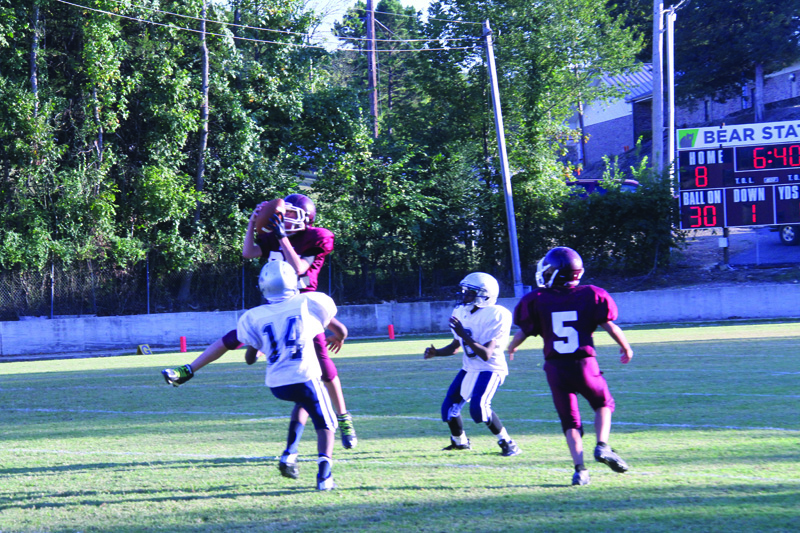 Mount Ida seventh graders came from behind to defeat Lafayette County 16-14 in their conference opener last Thursday.
Lafayette County opened the game with the ball on their own 30 yard line. However, they only needed one play to score as Demariah Philson exploded through the Lion defense and raced the distance for the score.  The two point conversion failed and the Cougars held a six point lead.
The Mount Ida Lions offense went to work driving 70 yards in 12 plays to score on a six yard run by Hunter Davis. Davis carried the ball in for the two point conversion to give the Lions an 8-6 lead with 8:46 to go in the half.
Lafayette County responded with a four play drive that ended with a 47 yard run by Philson for a touchdown. C.J. Williams carried the ball in for the two point conversion to give the Cougars a 14-8 lead.
Mount Ida started the second half with the ball. They were able to move the ball just inside Cougar territory before turning the ball over on downs.
The Cougars took to the air and Braden Thomas plucked the ball out of the air for Mount Ida for an interception.
The Lion offense took over on their own 43 yard line and drove 57 yards in four plays to score on a 25 yard run by Austin Hamilton. Hunter Davis carried the two point conversion in to give the Lions a 16-14 lead. The Lions held on to win the game by two.