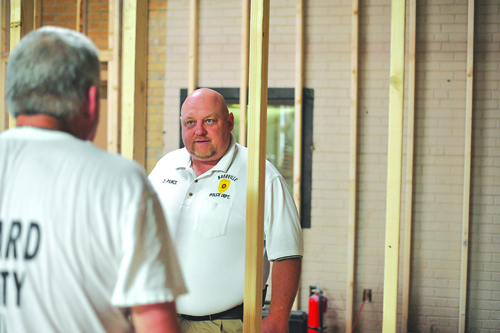 NASHVILLE – The old Howard county jail facility, which ceased operation in 1993, is currently under its third week of construction.
In recent years, it has been used as storage for various items including evidence. The original building was all concrete, with walls as thick as eight inches. According to Police Chief Dale Pierce, the demolition of the large walls will create more usable space for storage and offices.
As of today, twelve officers are working out of one office. The renovation of the old jail will provide them with office space, creating room for individual desks. The new space will also include a file room for Howard County District Court.
“We are making aggressive efforts to make Nashville a better place to live, which means we are gaining more evidence and filling out more paperwork,” Pierce said. “We need a usable space to store these things.”
“[The old jail] contains a lot of wasted space and we are a growing department” in need of the area, stated Pierce.
Pierce met with members of the city council last year and set a budget for the current construction venture at around $15,000.
“Most of the construction labor is done by skilled 309 prisoners,” said Pierce. “[It] is a program that pays county jails to house certain prisoners. These prisoners are usually skilled in certain areas such as maintenance and construction and are willing to work.”
The estimated completion date for the construction project will be sometime this fall.