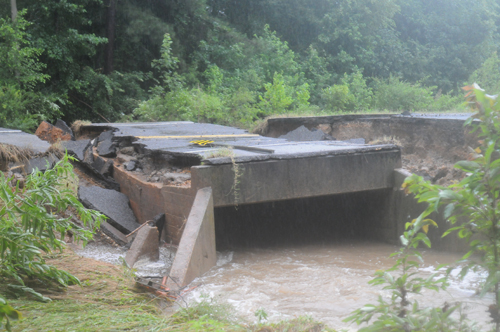 Brief but heavy rainfall Friday night into Independence Day morning throughout the southwest Arkansas region has caused travel difficulties and damage from flash flooding.
Bands of heavy rain whipped through the area beginning in the late evening Friday, dropping 4.61 inches of rain in Nashville, and 5.0 inches in Murfreesboro according to local reporting sources.
In Hempstead County, however, estimates are closer to 10 inches in various locations around the county. Reports show that Blevins, Delight and Prescott received some of the heaviest rain totals from the event.
The massive amount of water washed away road surfaces, culverts and bridges, most notably a section of Highway 371 located two miles west of the Nevada County line near Blevins. According to Tim Choate, fire chief for the city of Blevins, an area of highway was washed away some time around 4:30 a.m. on July 4. The breach in the road was found when an Entergy truck collapsed into the hole left as roadbed was washed away from a box culvert that had been overwhelmed by the amount of water rushing toward it.
Hempstead County Judge Haskell Morse additionally has released a list of county road closures, including county roads 16,23, 24, 28, 30, 38, 39, 41, 43, 45, 47, 51, 53, 142, 254, 256, 257, 258, 265, 269, and 280, which remain closed as of press time. The list of roads closed in Hempstead County has changed several times as floodwaters have moved through the county and damage is assessed.
While Howard County largely avoided the heaviest rain and reported no road closures, Pike County reported that Highway 195 near Delight was underwater at one point, and major flooding was also reported in Nevada County and Little River County. Highway 67 in Nevada County and Highway 355 north of Fulton were also underwater at the height of flooding.
In addition to damage to roads, local police and fire crews had to rescue at least one driver from rising waters. According to Hempstead County Sheriff James A. Singleton, a pregnant 18 year old driver and her three year old child were trapped in their vehicle near Saratoga on County Road 13.
The report says that approximately 10 inches of running water surrounded the vehicle, and water was also running into the cabin of the vehicle. A Hempstead County sheriff’s deputy was able to carry first the child and then the woman to safety, and the Saratoga Fire Department later towed the woman’s vehicle from the water.
Crews continue to work to assess road conditions, and residents are urged to use caution when driving.