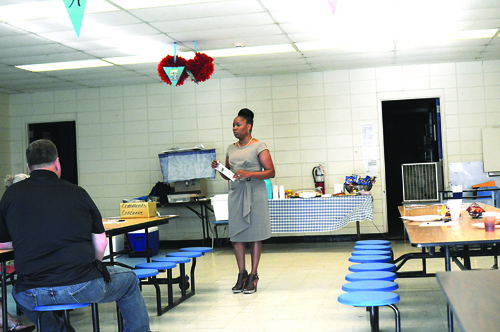 LOCKESBURG – A public meeting held to help determine the future of education in Lockesburg was lightly attended over the weekend.

The meeting, called by Michelle Burgess with JBH Collegiate Academy, was to determine public interest and support for the creation of a charter school in the city proposed to open in 2016. Burgess stated that she has started the application process for one of the seven available licenses to operate a charter school that have come available in the state this year. There are currently 20 charter schools open in Arkansas, and the additional seven licenses would bring that total to 27, she said.
At the public meeting, Burgess explained to those in attendance that a charter school is funded by public tax money, but open to enroll students from across a wide area, and while it follows Arkansas curriculum standards as a guideline, it does not follow those standards as strictly as public schools. She said that the school she wants to start would be focused on science, technology, engineering and mathematics, but also integrate arts into the curriculum.
Burgess also said that the school she intends would begin as a kindergarten through fifth grade program, expanding each year – likely until eighth grade, though continuing through high school is an option. Her stated goal for student population was around 150 students, though the stated maximum in her filing with the state put a maximum number at 360. She also said that she has inquired with the De Queen school district about leasing or purchasing the former Lockesburg elementary campus for the proposed charter school, but has not reached an agreement.
Describing herself as a Mineral Springs native who is living in Virginia, Burgess said that she had experience teaching special needs students in that state and that she would return to Arkansas to operate the school if the charter is granted.
The meeting, held at the former Lockesburg elementary school, was attended by only four local residents, with two leaving before the meeting ended. Most questions heard were about the basic format and definition of charter schools, but one resident inquired sharply whether the proposed school would have religious affiliation – expressing relief when Burgess said that it would not.
Burgess claimed after the meeting to be undeterred by the low turnout, saying that she would continue with the application process.