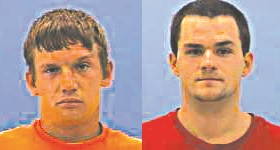 NASHVILLE – The reported theft of a large amount of electronics equipment from a Nashville residence late Friday night has resulted in the arrest of two local men for charges of theft of property and burglary.
According to statements from a representative of the Nashville Police Department, Dalton Ray Jordan, 23, of Nashville, and Aaron Wayne Lewis, 21, of Mineral Springs, were arrested in connection with the alleged burglary of a residence on Gains Street, from which a pair of computers, two flat-screen television sets and a large variety of stereo equipment was taken around midnight of June 5.
After being contacted by the residents of the burgled home the following afternoon, Nashville officers Jimmy Steely and Wayne Epperly quickly found witnesses who stated that a red Pontiac car was seen in the area the night before, which the alleged victim said was of the type that he had seen Lewis in on a previous occasion. The statement went on to say that the point of entry at the residence was difficult to determine, as multiple doors and windows were open after the reported burglary and the residence was left in disarray and damaged by those committing the crime.
Jordan and Lewis were separately brought into the Nashville police department for questioning on Tuesday, where each reportedly confessed to their roles in the burglary. Jordan is reported as leading the officers to about half the items taken, which were in his residence on D&J Drive in Nashville, while Harris is stated to have led investigators to a rural area off Street Farm Road near Cottonshed where the remainder of the stolen items were located.
Both were booked into the Howard County jail that evening.
Jordan faces a charge of theft of property and residential burglary, while Lewis will face two charges of theft of property and the charge of residential burglary. They both are being held on $50,000 bonds.