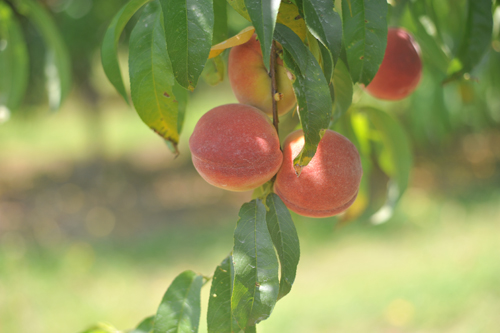 Local peach orchards, which once covered the county are largely gone, but some continue – weather permitting.
Joey Jamison, owner of Jamison Orchard, tends the land first established as an orchard by his grandfather in the 1930s. The 30 acre orchard, close to Center Point, is one of only three commercial orchards in the county, numbering 3,000 trees.
Jamison said there are three factors that contribute to the success of the peach crops: “Weather, weather, and weather.” The ice in January killed a number of buds, but most survived. Young trees in particular were impacted by the undesirable weather, said Jamison.
In addition to the icy weather, fungal diseases that impact the plants have been more common this year because of the unusually large rainfall. At a larger expense than usual, Jamison said he has been able to keep the fungus situation under control through the application of anti-fungal sprays.
In spite of Mother Nature’s variable temper, Jamison expects an average to above-average crop this year. Blooming began on March 10, around 10 days later than usual, which will cause ripening to be postponed for a short amount of time.
The third-generation farmer hopes to have peaches for sale in the local Farmer’s Market by this Friday or the following Friday. Jamison Orchard offers 30 or more varieties of peaches, four of which have recently been released from the University of Arkansas agricultural programs.
According to Jamison, the peaches that bloom later in the season are typically sweeter than those that bloom early in the season. Jamison is not the only local peach grower who has dealt with adverse weather throughout the year. Tim Jones, also a third generation owner, holds 25 acres for his 2,500 trees, which produce around 10 peach varieties.
The local insurance agent claims the weather has been strongly detrimental to his peach crop this year.
Similar to Jamison, Jones has also had bacterial concerns to address this season. Jones said, “Water is critical. It is important to manage the amount of water the plants receive.” On the other hand, the amount of rainfall is uncontrollable.
Forbidding the weather to dictate, Jones predicts to have a decent crop this year. He said the amount of peaches produced may be somewhat smaller than preceding years because of the excessive amount of water they have recently consumed. However, the peaches that are currently forming are “good-sized.”
Jones expects the peaches to be ripe by June 20. They will not be available at the Farmer’s Market.
Both Jamison and Jones have dedicated extra time and effort to their peach crops this season to overcome the natural obstacles that have plagued them.