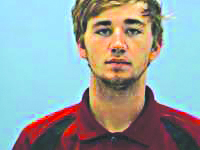 BUCK RANGE – A report of the alleged theft of medications has led to the arrest of a Texarkana man on theft and burglary charges.
According to a release from Howard County Sheriff Bryan McJunkins, his department was contacted by Tana Lemons Tuesday about her suspicions that her home on Jones Road had been burglarized sometime the previous day. Deputy Joey Davis, who took the report, and Investigator Jade Hughes arrested Creighton Burke Flowers, 21, of Texarkana on June 9 in connection with the alleged burglary, the statement goes on to report.
Flowers is being held in the Howard County Jail on charges of theft of property and residential burglary. No bond information was available for him as of press time.