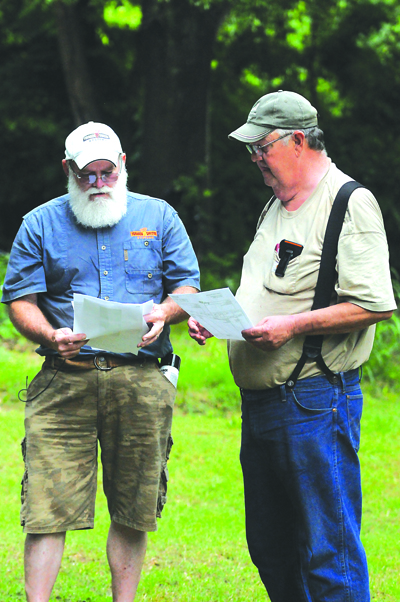 MINERAL SPRINGS – A donation from a company across the state has brought a local family that has lost so much some needed peace of mind.
Thursday afternoon, a storm shelter donated by Tornado Shelter Systems of Austin, Arkansas was placed in the ground behind the Mineral Springs home of David and Pat Wester, whose son and daughter-in-law died while sheltering their child in the tornado that swept through Nashville earlier this month.
Howard County Sheriff’s Department Chief Deputy John Eric Glidewell said that the donation had been made mere hours after the tragedy, with Jim Smith, owner of the company, calling him the evening after the deadly storm.
“He called up and asked about [the child], and if somebody was taking care of her – then he started asking about soil conditions at their house,” Glidewell stated. He reported that the unexpected conversation led him, as a friend of David Wester, to become personally involved in the process of getting a storm shelter in the ground behind the couple’s home.
Smith, who drove the fiberglass and steel structure down from his facility near Cabot himself, said that his company, which has supplied storm shelters to many large corporations such as Georgia-Pacific and others in the area, was there for things like this.
“I’ve been doing this since 2007, and every day I see the need. Having these shelters saves lives. I’m glad that we can fill that need,” he said.
Tornado Shelter Systems manufacture a variety of shelters, from all-steel above-ground constructions that can house more than a dozen people to the fiberglass in-ground model that the Westers received. The shelter Smith brought to them is valued at $5,000.
Smith and Glidewell did some of the work of installing the shelter themselves, though the literal heavy lifting was done by Tony Fatherree, a local construction contractor who volunteered his time and the use of a trackhoe when he heard about the donation. The installation of the storm shelter took around four hours Thursday afternoon, a process that was witnessed by multiple statewide media outlets.
Patricia Wester said that she had been overwhelmed by the outpouring of support from “neighbors and friends and people we don’t even know.”