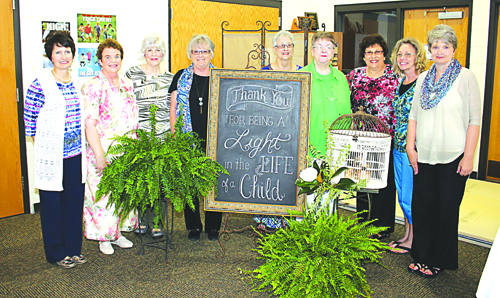 Two hundred and eighty-eight years of that are departing from the primary school campus, through the loss of nine teachers.
Pam Wynn has taught for 40 years, 37 of which have been spent teaching kindergarten youngsters at the home of the Scrappers. In addition, she taught in Farmington, Arkansas, for two years and Lincoln for one year.
Wynn stated in a recent interview that her inspiration for becoming a teacher and working with young children came from her aunt.“My aunt owned a daycare and I helped during the summer,” she said. “It instilled in me a love of children.”
Wynn has made several memories during her career and went on to note that her favorite times were when she observed a student’s eyes light up when they discovered understanding in a subject, as well as the many hugs she has received from her pupils.
Her plans after retirement are to “rediscover herself” and “go in a new direction.” She said that she plans to do this through volunteer work and possibly finding a place of service at church.
Wynn also took time to offer advice to current and up-in-coming educators.
“Remember there will be challenging times, but the things you are doing are worth it,” she stated. “Celebrate the joy of teaching.”
She departed on a note of thanks to her colleagues at Nashville Primary for their wonderful support over the years.
Sarah Turner, who has served as school counselor for the past five years, had the most total experience with 43 years spread across several districts. She has one year of service at the Florida College Academy in Temple Terrace, Florida, where she was a seventh and eight grade teacher and at Lavaca Public Schools, where she taught first grade. Turner was also a first grade teacher at the Greenwood School district as well as an elementary counselor, assistant principal and principal for a total of 21 years. Seven years of her career were spent at Waldron Public Schools, where she was a first grade teacher and a principal, and at the Ashdown School district, where she also taught first grade and was an elementary counselor.
Linda Hallmark came next on the list of exceptional experience, with all 38 years being spent at the Nashville School District, where she has been serving as the Migrant Education Tutor/Coordinator.
Sharyn Young became a speech pathologist for the school 36 years ago after discovering the career through her son. She explained that, at the time, he was four years old and having to travel to Texarkana for bi-weekly speech therapy.
“I had never heard of that and I thought how neat it would be helping to teach kids how to talk,” Young said.
She pursued her degree at Henderson State University then was hired by the Nashville School district, where she said her fondest memories were of her kids “graduating” from her.
“I have always said that the greatest joy I got out of this was when kids could be dismissed and didn’t need me anymore,” she noted.
According to Young, her choice to retire has nothing to do with her feelings towards her students or her job in general, but rather, the new required paperwork.
“The government paperwork is just out of control,” she said. “It’s made it so it’s not fun anymore. I love the kids and I like what I do, it’s just the paper work is ridiculous.”
Her newfound free time will be spent living simply. She remarked that she is looking forward to being able to sleep in past 4:30 a.m., discovering new branches of her family tree and cleaning out her closets.
Dena Pinkerton and Stacy Bright have worked just one year shy of 30 years each in education. Pinkerton spent the majority of her career teaching kindergarten at Nashville. She also held a one year position at Watson Chapel Academy in Pine Bluff and six years at Indiana Street.
Bright started out teaching at Hope and Blevins but spent her last 12 years educating first, second and fourth graders locally.
Karen Teeter first held positions at McRae Middle School in Prescott, Central Primary in Arkadelphia and Murfreesboro Elementary School before spending nearly a decade of her 28 years of work at Nasvhille teaching first graders.
Primary Secretary Phyllis Blanchard, who has worked for the district 24 years, and Linda Plant, who has been there 21, have spent their entire careers at the local establishment. Plant has been a first, kindergarten and third grade teacher.

Nashville Junior High bid fare-well to a beloved history/civics teacher and a school nurse.
Connie Castleberry taught many of the individuals present at Wednesday’s reception the ins and outs of the government and how our country came to be during her 38 years teaching ninth graders civics, 10 of which were also spent teaching eighth grade U.S. History.
Castleberry is a 1972 graduate of Benton High School and a 1976 graduate of the University of Arkansas. She recieved her masters degree from Henderson State University in 2003. Her husband was the late Rick Castleberry and she has two daughters, Courtney Worther and Kate Kaykendall, along with two granddaughters, Kyleigh and Landrey Kaykendall.
Castleberry told The Nashville News Wednesday that she had thought about teaching from a young age, but it was really two teachers that she had in school who gave her the desire to pursue a degree in the field: her eighth grade history teacher at Benton and her government professor in Fayetteville, who she noted “got us revved up to teach.”
She went on to explain that her favorite memories from her time educating young minds would be the yearly mock trial she had her students participate in and the visits they took to circuit court.
Castleberry said that she will miss “the kids” and her school family, but went on to remark in a speech she gave, “When I realized there were 11 people on staff that I had taught, I realized it was time to go.”
Now, Castleberry is looking foward to spending time with her grandchildren, traveling and “just taking it easy.”
For all but the last decade of Mary Gamill’s 33-year career, she was the only school nurse covering all four campuses.
Gammill ‘s decision to pursue work in the medical field was influenced by her father, who succumbed to cancer, and her mother, who was a nurse. Young Gamill spent many afternoons after school at the doctor’s office where her mother worked.
After graduating college, she started working as an RN in 1979 at Colonial Nursing Home before going to Howard Memorial Hospital as a labor/delivery nurse and newborn nursery supervisor. She was still working at Colonial Nursing Home on weekends up until she was granted the position of school nurse, which had only been in existence for two years at the time.

Looking back, Gammill said she will always fondly remember the time her door was decorated for school nurses day and signed by the staff at Nashville.
She also offered a piece of advice for the next to hold the position of school nurse, “It may seem overwhelming at times, but you grow into it. Have confidence.”
Gammill will continue going to her grandson’s baseball games and will now have more time to enjoy reading “weird” sci-fi stories. She commented that she also loves to watch old black and white movies and go to amusement parks.
“I still love to ride roller coasters,” she said.
Gammill went on to note, “I plan to just enjoy my family. When I was working, my time was limited, but now I can travel and will probably play around in the yard and in the woods.”
Nashville High School lost three of its most experienced teachers as Allyson Tollett and Freddie and Sharon Horne retire after decades of service to the school district.
Allyson Tollett was a staple in the math department at Nashville High School with 18 years of teaching higher math for the school. Tollett taught the first Calculus class at Nashville in 1989. Tollett also spent one year teaching in Georgia, seven years in Mineral Springs, and nine years teaching at Ouachita Baptist University. Tollett enjoyed much in her years at Nashville but said her most enjoyable part was the camaraderie found among her fellow coworkers, and teaching the kids that would be going off to college.
Husband and wife Freddie and Sharon Horne were experienced teachers when they came to the Nashville School District 15 years ago from Gurdon, where Freddie spent 17 years teaching and Sharon taught for 19 years. But this duo wore many hats during its career. Freddie has taught Travel and Tourism, CBA, and was FBLA Advisor, a bus driver, principal and many more. Sharon has taught 10th and 11th grade English, US and World History, been a special ed aide, taught economics and speech. Both agreed that the teamwork and Scrapper Spirit were something they enjoyed about being teachers in Nashville.

In total between the three, Nashville High not only lost three of its favorite teachers, but also a combined 100 years of teaching experience that can never be replaced.
Only one teacher at Nashville Elementary School called it quits but with this one retirement, 38 years of teaching experience in Nashville School District is also leaving.
Becky Floyd has spent her entire teaching career as a Scrapper. She was a kindergarten teacher for 21 years, and spent 10 years as a 4th grade teacher and seven years as a fifth grade teacher. Floyd spent the majority of her 17 years at Elementary as a science teacher and also taught Social Studies this year.
Spending her entire time teaching in one place, Floyd said it was easy to know what she would miss the most, “Kids, that’s pretty easy. That A-Ha moment when I would see kids learn and when I would see a child that was sad and I could give them a hug and a smile would come across his or her face.”