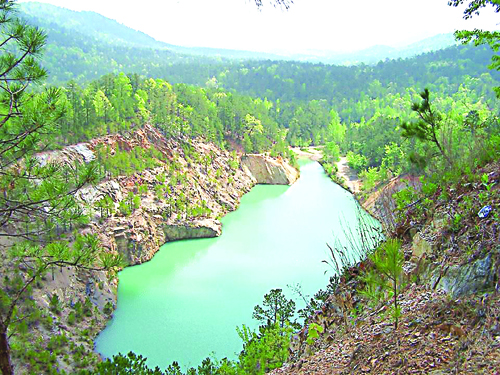 To most locals, “The Blue Hole” is a phrase that usually evokes the image of a serene, stunning baby-blue water hole with jaw-dropping cliffs of various heights towering above. A newcomer might notice the tranquil camp areas and winding four-wheeler trails surrounding the swimming hole.
In December, 2014 a local man, Jay Spoo, made the decision to purchase the 135 breathtaking acres hid in the backcountry of Montgomery County at the foothills of the Ouachita Mountains. Spoo says he made the decision to purchase the property because it was a beautiful place that needed some attention.
Spoo spent many days in the area as a child and said he noticed its gradual downfall. Before Spoo, the previous owner of the property resided out of state. Spoo realized trash and litter was beginning to overtake the majesty of the space and saw purchasing it as an opportunity to revive its once uncontaminated, sparkling appearance.
The new owner plans to use the area for pleasure such as swimming, hiking, camping, and ATV riding.
According to Spoo, the swimming area was once a mine for the mineral Barite. Mining in the area started in the 1940s and ended in the early 1970s. “For a period of time…Arkansas lead the nation in Barite production…and Barite produced in Montgomery County [in 4 short years] valued at more than $250,000,” according to the United States Department of Agriculture.
Barite has many uses, but in the mid-1900s its largest consumer was the oil and gas industry. As a result of a surplus of oil in the early 1980’s, the barite market decreased dramatically and ample drilling of it ceased, leaving behind near bottomless pits beneath the ground, usually filled with a spectacular blue-hued water.
Many stories about the “Blue Hole” include a claim of mining machinery resting at the bottom of the near-transparent water. However, because the depth of the water is so extreme, the bottom cannot be seen.
After purchasing the land, Spoo says a sonar surveillance of the water was taken and a large object was detected at the bottom of the West end of the hole. As of right now, the object remains unidentified.
Although some swimming holes created by mining activity can be dangerous for swimmers due to the toxicity of some minerals, Barite is not toxic because of its extreme insolubility and uncharacteristically heavy weight.
Most locals have heard various stories about the infamous “Blue Hole,” but it is not uncommon for its location to be a topic of dispute.
There are two entrances to the property: one through Albert Pike and one through Hopper. Anyone who has a difficult time finding its location on the internet might try coining it as “McKnight Barite Mine.” It has a latitude of 34.3681 degrees and a longitude of -93.8042 degrees.
The simplest route to reaching the old mine is through Hopper. Following along highway 240 through Hopper, a visitor would take a left onto NFW 517 and then a right onto NFW99. A small dirt entrance on the left will take you directly to the highly-praised area.
Spoo says the gate to the swimming hole has been down for around twenty years. He asks that anyone who chooses to indulge in the pleasures of this area be mindful to him and the land and take out what he or she brings in. Spoo intends to output all efforts to keep the property clean and inviting, and expects all visitors to do the same.
As a safety suggestion, Spoo suggests that swimmers do not jump or dive from the cliffs and take caution swimming in the unknown depths of the beautiful blue water.
Although first time visitors may uncover some of the mystery and anticipation behind this hidden gem, they will never recover the amazement and wonder they will experience at the first sight of the notorious “Blue Hole.”