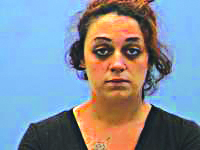 NASHVILLE – The use of a check from a closed account resulted in the arrest of a Nashville woman Wednesday evening.
According to statements made by Nashville police investigator Larry Marion, Tony Chesshir contacted the Nashville police department after himself being contacted by Regions Bank about a check they had received from a retail business. The check was drawn on an account that Chesshir had reportedly closed two years ago after a checkbook was allegedly stolen.
Marion said that the check was reportedly received at Selena’s on South Fourth Street, in the amount of $400. On the back of the check was reportedly an identification number belonging to Dannielle R. Murphy, 25, of Nashville. Video surveillance at the store also reportedly showed a person passing the check that matches Murphy’s physical description.
The statement goes on to say that Marion located Murphy at the Budget Motel in Nashville Wednesday and interviewed her about the incident. He reported that she had indeed passed the check, but that she had received it from a third party.
Murphy was booked into the Howard County jail on a charge of forgery in the second degree. No bond information was available as of press time.