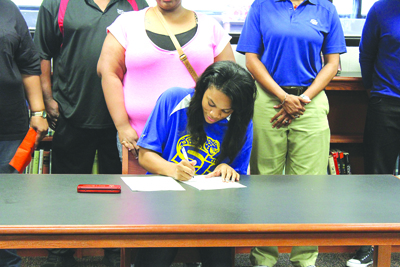 Sanders was a vital component of the Scrapperette basketball team during her time at Nashville as she was able to use her height to be a dominant force below the basket. Sanders accomplished much on the court her final year and gained much praise from her former coach, Ron Alexander.
“We are really proud of her and hope things go well for her,” Alexander said. “This season she was our second leading scorer and our leading rebounder. She had a good year her senior year.”
Sanders is now on her way to continue her basketball career at the collegiate level with the Jaguars and their first-year head coach, Shayla Canady. Canady has a challenge ahead of her as she will start coaching at the Division 1 Junior College level but she said she is ready.
“This is my first year at Southern University Shreveport and my first season where I can recruit my own players and I am very happy Timya gets to be a part of that first class,” Canady explained.
The coach also offered high praise for Sanders, describing her as the type of player she wants to recruit: “A very good kid that comes from a very good home and clearly here she has a very good support system within her school and that is what I want to recruit – good kids that I can guide to becoming good citizens.”
Sanders said basketball was not the only reason she chose to attend Southern University.
“I went down there to visit and it was not too big. It was homey,” Sanders stated.
Sanders will attend her first basketball function on July 6 as she prepares to become a college athlete along with majoring in nursing while at Southern University.