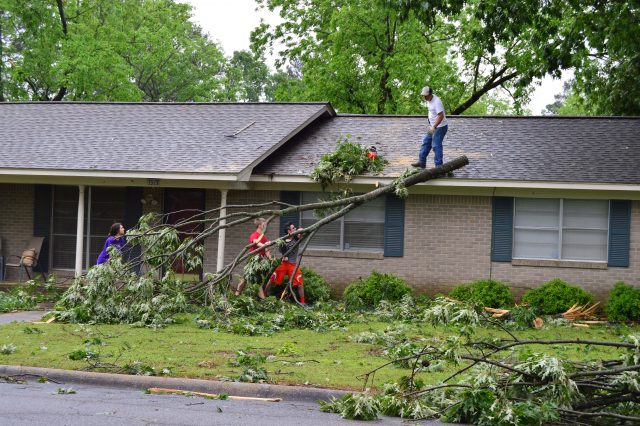 At the peak of the madness in the wake of the tornado Sunday night, every city police officer reported for duty without being summoned. Same for the firemen, city water and street employees.

Mayor Billy Ray Jones said Friday that he had later been told by some electric utility restorers that they had never seen a town respond so well to an emergency.

At one time, the mayor recalled, streets were blocked by fallen trees; there was no electricity. There were burst water and natural gas lines; and firemen were calling for help in rescue efforts at a smashed mobile home where two persons died. Help for the rescue of a child in the trailer was blocked by the trees.

The mayor also singled out two logging company owners — Charles Bailey and Randy Fatherree — who brought out their own heavy equipment and workers to clear fallen trees.

The mayor also said he didn’t want to interfere with the momentum of the cleanup, but that it could be as long as a week before the city finds out officially if it will get assistance from FEMA, the Federal Emergency Management Agency, in paying for the cleanup.

Electricity to customers was restored by Thursday except for some places where service had been pulled away from houses by falling tree limbs.

“If it weren’t for the logging crews getting in there on the ‘highline’ behind the old hospital we’d still be in the dark,” Mayor Jones said.

The cleanup has been going “really great,” he said, saluting the volunteers from churches, fire departments, schools and other organizations helping with cutting trees and moving debris to street side. Tyson Foods and Pilgrim’s cooked meals, and the Red Cross was set  up in the Family Activities Building of the First Baptist Church in Nashville, making sure that storm victims and workers were being taken care of. He said that in four days, almost 1,000 volunteers and companies had registered at the staging area in the Nashville fire station.

A total of almost 3,000 customers were without power in Howard and Pike counties, he said.

City police, Arkansas State Police and Highway Police manned check stations into the Greenwood Addition which was severely damaged. Other heavily-damaged areas on Sunset Street and the area around the city park were also patrolled by law enforcement.

Some underground “drilling” on Sunset Street was explained as replacement of downed telephone lines.” When they have something like this happen, the phone company wants to come in and bury the new lines, not replace more lines up on the poles.”

The tornado roared through at about 11:30 p.m. Sunday, toppling trees and damaging homes. Two persons were killed, two received critical injuries and six more were treated and released by Howard Memorial Hospital.