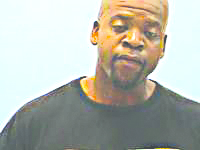 NASHVILLE – A local man is facing three felony charges as a result of a report made to police Thursday.

According to a statement issued by Assistant Chief Amy Marion, city officers arrested 36 year old Lawrence Swift Jr. after a man with injuries to his face accused Swift of punching him in the face.
“Officers Ty Basiliere, Greg Parker, and Justin Garner went to the residence at 718 South Ansley Street,” Marion said in the statement. “Mr. Swift tried to hide underneath a vehicle [but] was arrested without incident.”
In addition to a felony domestic battery charge stemming from the report made by the alleged victim, Swift has also been charged with two counts of possessing a controlled substance and remains in Howard County Jail on a $75,000 bond.