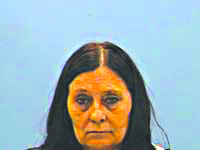 DIERKS – A traffic stop led to the arrest of a Lockesburg woman last Friday evening.
According to a report from the Howard County Sheriff’s Department, Bonnie Hulburt, 52, was stopped on Highway 70 east of Dierks by Deputy Timmy Floyd because of a non-functioning headlight. The report goes on to state that when speaking with the deputy that her speech was slurred and she was mumbling. Floyd reportedly asked if Hulburt had taken any medication, and stated that he received the reply that Hulburt was “on pain meds and muscle relaxers.”

Floyd’s report then states that he asked Hulburt if there was any substance other than her medication in her vehicle, and states that Hulburt claimed not to, and invited him to look through the vehicle.
During the search of the vehicle, Floyd allegedly found a small zippered case containing a glass pipe, a set of scales and a small plastic bag containing “off white colored residue.”
Hulburt is reported as stating at the scene that the case and its contents belonged to her, and that the pipe was used for smoking methamphetamine.
Hulburt was placed under arrest on a charge of possession of drug paraphernalia and transported to the Howard County jail, where she remains on a $25,000 bond.