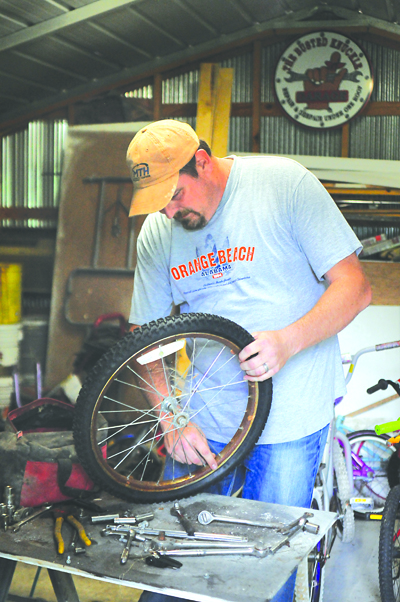 A Nashville man is on a quest to get two-wheeled mobility to kids who otherwise might not have the opportunity.

Mark Dale, a local businessman, volunteer firefighter, constable, and military veteran, is working to refurbish old and unused bicycles to deliver them to local children who do not have a bike of their own.
Dale, who has had a paint contracting business for the past eight years, stated that he finds that his employees are largely able to do work by themselves with only a little direction, supplies and somebody lining up work for them – which leaves him with free time during the day. Wanting to fill that time, and also wanting to serve his community, Dale gradually came to the idea of fixing old bikes for those who don’t have them.
“I see bikes just stuck in the backs of sheds or laid out in yards rusting all the time,” he said, stating that it made him think about his own childhood. “I’m 40 years old, and I’m the tail end of the generation that knew where our friends were at because of all the bikes in one friend’s yard or out on the street.”
The idea gelled about four months ago, but it took him a while to get to the point where he was ready to talk to others about it. “About two months ago, I started talking about it on social media, and that’s when it really took off,” Dale stated.
Raised in a religious household, the son of a preacher, Dale focuses on the service aspect of his project, citing chapter 25 of the Gospel of Matthew: “It really is for the kids, and I hope it can be a ministry to them, maybe help them decide whether to be a goat or a sheep – to go on to serve their community when they grow up.”
Service to community is a large motivator for the former Air Force ammunition specialist and recent volunteer with the Bingen Fire Department, who is also serving his first term as constable for the Mine Creek Township in Hempstead County. He spoke about the community, both in Nashville and the surrounding area, and the importance of people helping each other to build those communities.
As donations have poured in, Dale finds that initial goal of having six to ten bicycles ready to be delivered to local children is inadequate. More than a dozen bikes already crowd the small shop next to his house, and more, some already refurbished and waiting for their new owners, are stacked around outside. “There is a need, a bigger need than I ever anticipated,” he said.
The process of refurbishing most bikes is fairly simple, Dale explained: most need new tires and innertubes, and chains usually have to be soaked in oil a couple of days to remove rust before they can be put back on the bikes with parafin lubricant. “A set of tires and tubes costs about $30, getting the chain back in shape just takes time,” Dale stated.
Even bikes needing more substantial repairs are often not a problem. “I have a lot of wheels, so a warped wheel can be replaced pretty quickly. The bikes I get that can’t be repaired usually have a lot of good parts, so I just swap those out. And if the body is all scratched up, well – turns out I’m a painter,” he said with a slight grin.
The plan to get a few bikes to a few local children has expanded to all the siblings in a family, or, if he has adult bikes to work with, the parents as well. He also is planning to deliver bicycles as they become ready, rather than waiting for Christmas as he originally intended.
“I’ll do what I can to get bikes to kids – and sometimes that means getting one to older brother so that they can ride together, or mom or dad so that they can keep an eye on them. And I’ll do what I can to fit the bike to the kids – adjust the seat and handlebars, put on training wheels if they need them. Whatever will get them riding,” he said.
Of course, he realizes that all of that takes a lot of work, and welcomes the contributions of others. “I couldn’t do this all by myself. When somebody brings me a set of tubes, or drops off a bike, that’s a huge help,” he said. He also said that he would happily accept the help of volunteers: “This doesn’t belong to me- I don’t own it, it’s not mine to own, and anybody who wants to help get bikes to kids, that’s a good thing,” he explained.
He does have some helping him, at least to test the bikes coming out of his workshop. “I’ve got four kids, three girls and a boy, from pre-school to college, and they get to ride the bikes and tell me if they are ready to go out,” Dale reported.
He does not have any firm plans on when each bike will go out, but says that when they are ready, the right child to ride them is out there. He also said that he won’t limit his work to bicycles. “I’d love to do tricycles and wagons,” he said.
The one thing that he does shy away from about the project is notoriety: “Please make sure this isn’t about me. It’s about the kids, and just riding a bike, and people doing for each other.”