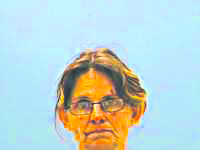 MINERAL SPRINGS – A local woman is facing a firearms charge following an investigation into a report of domestic violence.
According to police reports, 48 year old Michele Harris was taken into custody at her Highway 27 residence Monday after Howard County Deputy Blake Eudy responded to a call reporting that an argument with her husband had turned physical.

“[Harris] told Deputy Eudy that, during the fight, she got her hands on a pistol that she knew was in the residence and belonged to [her husband],” Deputy Jade Hughes wrote in the affidavit of arrest related to the case. “She said that she grabbed a pistol and they started wrestling over it. She stated that she grabbed the pistol in self defense.”
Although Eudy would later confirm that Harris’s husband “took the pistol and left the residence,” the affidavit alleges that he received consent to search the home for the firearm. During the search, Harris “told Deputy Eudy about a Remington 30-06 rifle that was hidden under the couch,” claiming the gun belonged to her son.
A convicted felon on parole, Harris admitted “she knew she wasn’t supposed to have the gun,” according to the affidavit, and was transported to Howard County Jail on a charge of possession of firearms by certain persons.
Bond information was not available at press time.