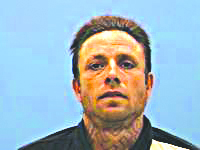 NEWHOPE – A man listing a Mena address but reportedly originally from California was arrested overnight in connection with multiple drug cases and a recent homicide.
Nick C. Stoicu, 39, was arrested between midnight and 1 a.m. Thursday morning by Howard County deputies Travis Turner and Timmy Floyd, according to a statement released by Sheriff Bryan McJunkins. Stoicu is reported as being wanted on multiple felony warrants for narcotics and weapons offenses in Polk County, as well as being listed as a “person of interest” in the murder of Ritchie Lynch of Booneville.

Logan County authorities, speaking to media, described Stoicu as armed and dangerous, and stated that Stoicu fled on foot during two previous attempts to apprehend him, once in Logan County and once in Polk County.
Logan County sheriff Boyd D. Hicks stated that Lynch is believed to have been killed Friday morning, though his body was not discovered until Monday. Three other persons connected with the case have reportedly already been arrested, one by Logan County, two in Polk County.
Turner and Floyd were reportedly contacted with information about Stoicu’s whereabouts by an informant. According to McJunkins’s statement, when they approached the house on Tollett Road where Stoicu was reported to be, Turner knocked on the front door as Floyd covered the back door. Upon hearing the knock, Stoicu allegedly ran out the back door, where Floyd was able to apprehend him without further incident.
Stoicu is expected to be extradited today from Howard County to Polk County, according to McJunkins, where he will be held on a $125,000 bond.