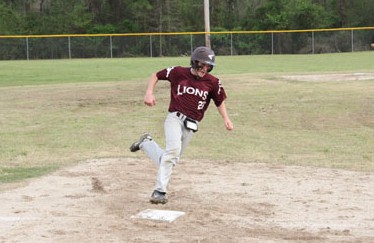 TJ Wilson slapped a three run homer in the bottom of the sixth inning to clinch a 9-2 victory over the Caddo Hills Indians Monday in non-conference action.

Caddo Hills was able to open the game with an early one run lead. Seth Powell drew a lead off walk and stole second and third, putting himself a short trot from a run. He went on to score thanks to a left field shot by Gavin Caldwell.

TJ Wilson and Jesse Lowry led off the bottom half of the opening stanza with back to back doubles to left field. both would score to give Mount Ida a 2-1 lead. Austin McAdoo would add another run for Mount Ida in the second.

McAdoo opened the bottom half of the fourth inning with a single and Hayden Bishop reached on an infield pop up. TJ Wilson drilled one to the fence for a triple to score both and put Mount Ida up 5-1.

Caddo Hills was able to cut the Lion lead by one in the fifth thanks to a run by Seth Powell.

Mount Ida responded with four in the sixth inning.

Hayden Bishop, Zach Anderson, and Anthony Spurling singled before TJ Wilson drove the ball over the left-centerfield fence for a three run homer.

Hayden Bishop was credited with the win for Mount Ida.