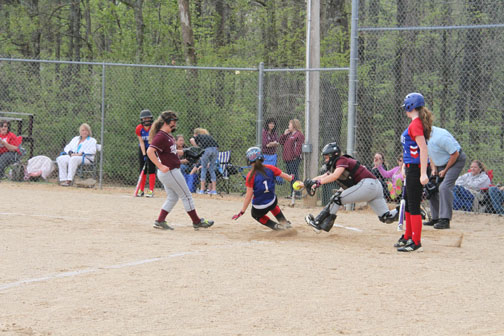 The Caddo Hills Lady Indians saw an 11 run lead slip from their grasp in the sixth inning, but was able to hold on for a 15-12 win over the Mount Ida Lady Lions.

Caddo opened the game with a double by Savannah Brown. Abby Laughery and Haley Forest each had a single. All three girls went on to score.

Mount Ida responded with runs by Patty Anne Whisenhunt and Mallory Carr. Whisenhunt drew a one out walk and Carr reached on a single. Taylor Stover drove both in with a hard hit double.

Tiffany Welch led off the third with a single, followed by a single by Kayla Torbett. Mount Ida was able to get back to back outs, but the Indians responded with eight consecutive singles, scoring seven runs, to take a 10-2 lead. They would increase the lead to 11-2 in the top of the fourth after Forest scored on a double hit by Robin Kelley.

Mount Ida cut the lead to seven with runs by Dorian Gwinn and Mattie Fiorello in the bottom of the fourth.

The Indians added four in the top of the sixth to put themselves within three outs of a win thanks to a 15-4 lead, but the Lions would rattle off eight runs in the bottom of the inning to avoid the sportsmanship rule and give themselves a shot at a win.

The Lady Lions reached base every way possible in the bottom of the sixth, recording three hits, four walks and four hit batsmen. Eight different Lady Lions crossed home plate as they cut the Lady Indians lead to three.

Caddo would hold on for the win.

Haley Forest was the winning pitcher for Caddo Hills.