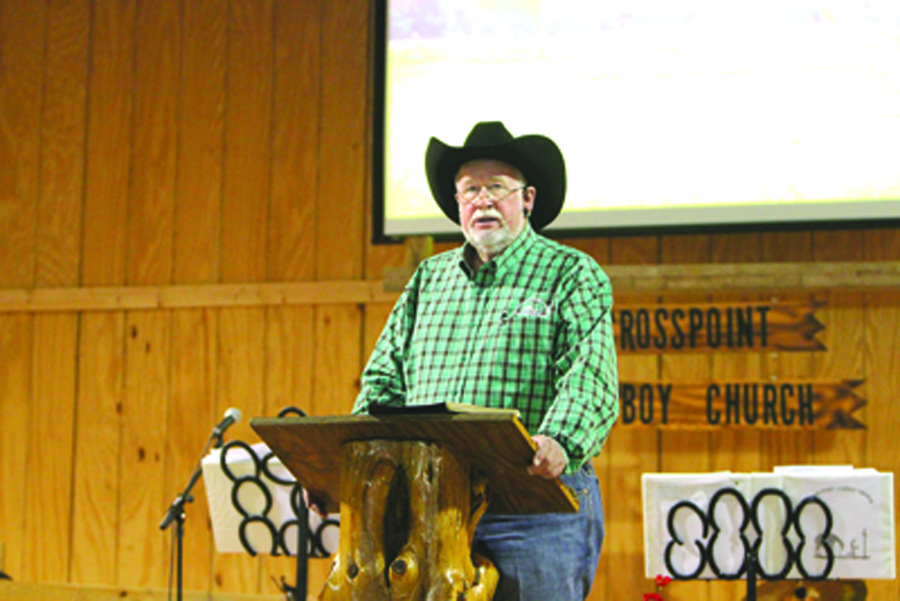 NASHVILLE – After many years, the Cross Point Cowboy Church has a new man in the saddle as Bryan Adair has taken over for Don Jones, the former pastor of the church.
Adair is well equipped for the task at hand as he comes from a similar church in Glenwood where he pastored for almost eight years. But coming to Nashville was not part of Adair’s plan.

“I was asked by someone in the Arkansas Baptist State Convention if they could give my name to them (Cross Point) and so I said give my name and just let God take me where he wants too,” Adair explained. “I thought, ‘I do not want to close a door that God may have open for me.’”
A search team composed of various members of the congregation was sent to see if Adair was the right fit, conducting interviews and listening to sermons preached to his Glenwood followers.
“Then, about three weeks ago, I was called to this church and they asked me to come be their pastor,” Adair said.
The new pastor made his debut Sunday, speaking about the greater plan that God has for believers as well as the plan that he has for his new church. At the end of his message, Adair officially placed his membership from Glenwood Cowboy Church to Cross Point and was welcomed with open arms by the congregation.
Yet even as Adair becomes pastor at his second cowboy church, it’s important to note that ministering was not always his profession. After working assorted odd jobs and spending 12 years at a natural gas plant, Adair felt becoming a minister was his calling.
“When I was 33 years old … God called me to become a minister,” he said. “I worked at a natural gas plant and it was during that time that I realized that God was calling me to preach.”
Although he will work full time as pastor at Cross Point, Adair still has another project close to his heart: a mission church in Waldron he helped found about a year ago.
“We started about a year ago with the cooperation of the Arkansas Baptist State Convention and the Concord Baptist Convention from around Fort Smith,” he said. “We are growing and have many events coming up and it is a good outreach program and hopefully within a year it will be a church.”
As Adair gets settled in at Cross Point he thinks there will be much to look forward to – with God’s help.
“You can either do a lot of planning or you can be still and let God put on your heart what he want for this church,” he said. “I think there is already many great things that are happening and we are not to stop any of that, but we are to keep on doing that and let God add on and help us have a better outreach into the community.”
Those hoping to hear Adair’s weekly messages can do so by attending the Cross Point Church at 8:30 a.m. on Sunday mornings.