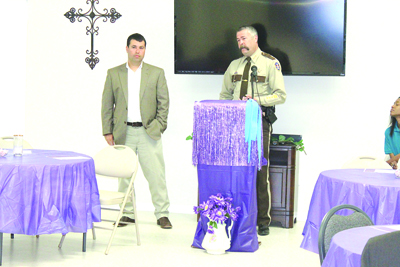 TOLLETTE – Preventing and overcoming domestic violence was discussed Saturday morning at the First Church of God in Tollette at the Christian Women’s Connection conference, which was themed “A New Me.”

Jade Hughes and Todd Tallant with the Howard County Sheriff’s department were the first to speak. Hughes provided several statistics concerning abuse and assault. He explained that domestic violence usually occurs between the hours of 6 p.m. and 6 a.m. and that domestic violence is the third leading cause of homelessness in families.
Hughes also noted that women ages 20-24 years old were the highest at risk to be victimized and that more than 4 million females experience rape and assault from their partner.
He went on to outline common actions of abusers, which include: mentally abusing the partner through name-calling and constant accusations of being disloyal; trying to control where the partner goes as well as who they see and talk to; pressuring the partner to have unwanted sex; and stalking.
Hughes dictated several true stories involving domestic violence that he has witnessed throughout his career, many of which end with the victim immediately bailing the abuser out of jail, claiming that they lied about being abused or even trying to defend their assailant by attacking the officer who came to defend them.
Linda Miller with Howard Memorial Hospital, whose aunt lost her life to household violence, thoroughly explained what happens to a victim when they are taken to the hospital.
“We just want to keep you safe,” she said.
Miller gave the crowd a list of long-term resources to seek out if they are ever abused: friends and family; pastors and churches; domestic abuse and crisis centers.
Reverend Juanita Jackson, who works with the Southwest Arkansas Counseling and Mental Health Center and is a licensed social worker, juvenile probation officer and youth service case manager, spoke next, discussing the effects abuse has on children.
She explained that kids deal with witnessing violence and being victims themselves two ways- by becoming timid or by bullying.
“Whenever I see a bully, I want to know who’s bullying him at home,” she explained.
Jackson noted that children learn through the actions they observe from others and that she attempts to tell her clients that just because their parents are abusive doesn’t mean they have to be.

victims often stay in abusive relationships because they do not feel good about themselves and fail to see their worth.
Jackson encouraged young women and men to have standards, be educated and love themselves and told parents to bring their children up to do so.
“You are a pot of gold,” she said. “If you know that, you won’t give it all to the first person who tells you that.”
Green was the final speaker and provided biblical examples of overcoming abuse, citing First Samuel. This particular book in the Bible demonstrates various traits of domestic abuse, such as jealousy and control.
“Domestic violence is more about power and control than gender,” she said.
Some of the door prizes that were given out included “911 bags” put together by the CWC and the women of the church. The trendy tote bags were filled with “everything you’d need to make yourself and your children safe,” stated CWC president Judy Mathis.
Items included in the bag were personals, a Bible, snacks, a flashlight and much more. The bag can be kept somewhere that it is easily accessible in case of the need to make a quick exit and getaway.
Mathis said her CWC group was inspired to host the conference after seeing a wide-spread need to educate people about domestic violence and rape.
“We looked at what was going on in the community and all over and wanted to try and give the community and church information and knowledge that they’ll need if they ever run into a situation,” stated Mathis. “Our goal is to put the knowledge out there. Knowledge is power. We’re trying to let people know that there’s information and hope out there and that they don’t have to stay in the position that they’re in. Once you gain knowledge you have the power to change who you are- hence ‘A Brand New Me.’
Mathis hopes to be able to recruit local advocates to be there for people in emergency abuse situations. The hospital would contact these advocates when a domestic violence victim is admitted. They would provide guidance and a place for them to stay as well as necessities, such as a 911 bag. The advocate would also accompany the victim to court.
“I hope we’re asked to do this again next year because it is a continual educational process,” Mathis concluded.