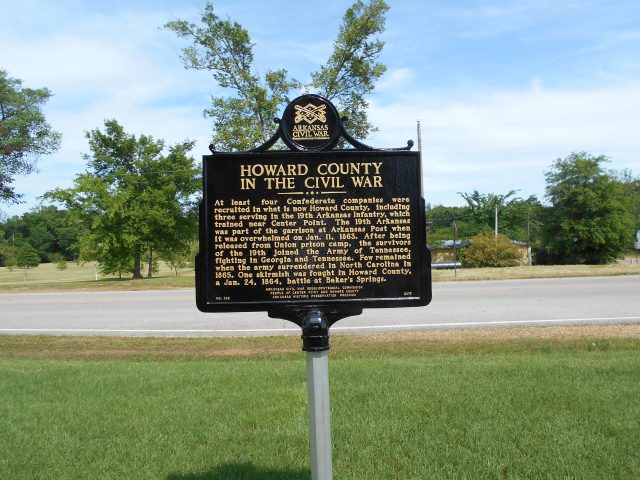 About two dozen people gathered under a shade tree on the Center Point “square” Saturday afternoon for the official dedication of a historical marker related to the town’s role in the Civil War.

Frank Puryear, a retired Nashville educator and Civil War scholar, talked for about 15 minutes about several companies raised from the area around Center Point who went off to fight with Arkansas’s 19th Regiment. The companies were raised by private funds and the men trained near Center Point.

The new soldiers were poorly trained and ill-equipped, he said, less than a third of the men had weapons. The regiment sustained modest losses in skirmishes in which it was not at the center of action. That all changed later in the war and losses became fearsome.

The regiment suffered heavy casualties, and in big battles near the end of the war only a small percentage of Arkansans survived.

Many of the soldiers were captured in the Battle at Arkansas Post. They were eventually sent by boat up the Mississippi River to a prisoner of war camp not far from Chicago.

Many died on the way. “They are buried all along the Mississippi,” Puryear said.

Except for supplying volunteer soldiers, Howard County was mostly left out of the war. There was one skirmish fought at Baker Springs in a remote area northwest of Umpire. That fighting was between southern bandits who were surprised by Northern troops.

The Civil War changed the nation. “The key is that it made us one nation,” Puryear said. “We survived it, and it made us stronger.”

The new gleaming black and gold marker stands just a few feet from one placed at the 100th anniversary of the war’s end. The 150th anniversary marker includes small lines of words at the bottom, noting that the marker was placed by the Arkansas Civil War Sesquicentennial Commission, the people of Center Point and Howard County, and the Arkansas Historic Preservation Program.

Puryear said that each of the state’s 75 counties got a Sesquicentennial marker.

After Puryear’s talk, most of the audience wandered off to the nearby annual community fund-raiser BBQ and auction which was about to begin at the Center Point Community Center and Fire Station.