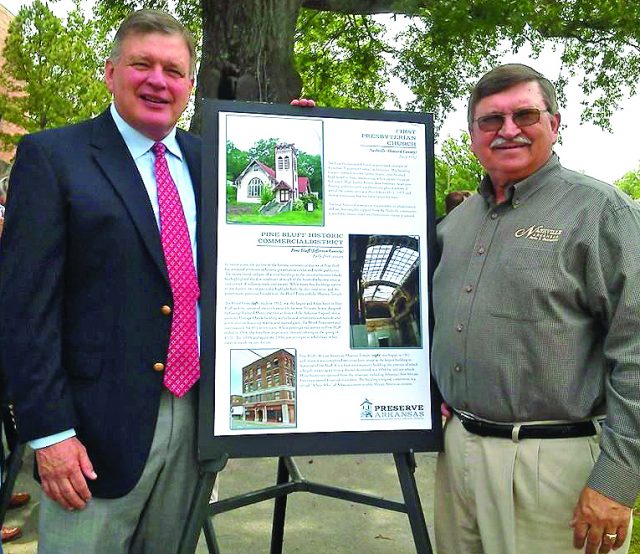 Work continues on the Howard County Historical Society’s Museum on Hempstead Street in Nashville, with a May deadline set for the exterior part of the work.

The museum is located in the former Presbyterian Church and is listed on the National Register of Historic Places.

Much of the restoration has been funded by a grant from the Arkansas Department of Heritage. Freddie Horne, who has helped lead the effort to preserve the structure, says May 1 is “kind of a deadline for us for everything in the grant. I’m confident we’ll meet the deadline. We’d like to have open house for the Peach Blossom Festival” in early May, which is Arkansas Heritage Month.

The grant was matched by local donations.

A number of projects have already been finished, Horne said, including the foyer, Sunday School room, installation of windows and pastor’s study.

In addition, “We’ve started on stucco wall repair in the chapel. We haven’t done the floors. We’re going to leave them as original as possible. They’re heart pine floors. I like their character,” Horne said.

Workers have worked on damage to interior beams caused by squirrels, raccoons and birds, according to Horne. “We’ll clean them and stain and varnish them.”

Horne and his army of volunteers have “cleaned the attic space. We pulled out old wiring. There was a wildlife latrine in the attic. We took out 80 pounds of latrine material by animals,” an accumulation over the last 100 years, Horne said.

“While we were up there, we discovered the original building had a cedar shake roof. When we put the new roof on, the old shakes fell into the attic. We’re going to put some of them on display.”

On the exterior of the building, 75 percent of the surface has been scraped, sanded and primed, Horne said. Colors that passers-by may see are different primers, not the final color, according to Horne.

Major repairs were needed on the bell tower, which had rotted out, Horne said. “We replaced the studs. We put in a moisture barrier and siding. One of the major grant requests was to fix the bell tower.”

Workers also have replaced some of the siding on the lower level of the building. Siding replacement on the upper level will require a 60 to 80-foot cherry picker, Horne said. “We’re making arrangements for that.”

Horne said the original building was pale yellow, and the color will be preserved. “We sanded in a circle down to the wood to find the original color. The minutes of the Presbyterian church said the outside was yellow. We kind of wanted to change the color, but the Department of Heritage said to keep it.” The final product will be yellow with burgundy trim.

“One of the requirements of the grant is to try to retain as much of the original materials as possible,” Horne said. “If we replace anything, we use original period material if we can find it. We’ve found some material from that era that came off another building. I’m looking for heart pine flooring.”

New windows have been installed, and the building is watertight, according to Horne. There’s a new solid core fir back door. French drains have been placed on the north and west side. The foundation has been checked and approved.

Repairs have been made to the front steps, where some were broken and some were separating from the rail.

The society is receiving bids on electrical work and has heard from two or three bidders, Horne said. Carpenters are lined up to work on the bell tower and do facia and soffit work. Weather will determine their progress, Horne said.

Heating and air conditioning are in the planning stage.

The society is conducting a pew sponsoring campaign. Pews may be placed for $150 each, Horne said, and three spots remain to be filled.

There’s a lighting campaign for hanging lights in the museum. “The DAH board recommended school house lights. They’re round, white globes. Ten of those are planned. We’ve sold 6 of 10 sponsorships on the lights,” Horne said. The lights are $150 each and are not part of the grant.

Windows were provided by donations.

Horne said May 1 is the target date for the exterior and electrical work. “I hope it’s all done.”

Interior work has been done by volunteers and is not included in the grant, Horne said.

Additional plans include sidewalks in front of the building and a parking area on the south side. The society wants to add a storage facility in back of the manse in order to move building materials there.

As the May deadline nears for the exterior portion of the work, Horne said the project will be completed in a timely manner. “I’m optimistic about the whole thing.”