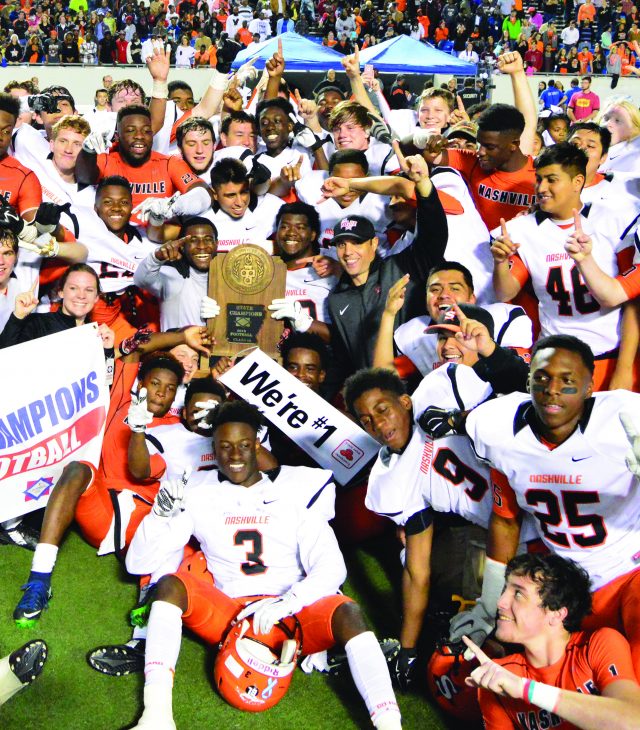 That’s how Coach Mike Volarvich describes his first season with the Nashville Scrappers, a season which includes a state championship, a 15-0 record and a host of school and state records.

Volarvich was named the Scrappers’ head coach in January after 5 seasons as offensive coordinator at Henderson State. He outlined his expectations in his first team meeting and introduced fans to the Pyramid of Success at the Scrapper Showdown. At the top of the pyramid – a state championship.

From offseason to spring football to team camps and summer conditioning, the Scrappers kept their sights on their overall goal. They defeated Class 6A El Dorado in their annual pre-season scrimmage at Southern Arkansas University and went on to reel off a perfect 15-0 record for only the second time in school history.

“For me it happened so fast,” Volarvich said. “The 15 weeks seemed shorter than a regular season.”

As he made the transition to a new job, Volarvich, his wife Lauren and their three children moved to Nashville, where she was hired to teach seventh grade English at junior high and two of the kids attended a new school.

Volarvich realizes that his first Scrapper team “set the bar pretty high with a 15-0 season. There had only been one other one in school history” in 1996.

Nashville is the third winningest program in Arkansas, Volarvich said, and the Scrappers have the most playoff wins in the state.

“There’s so much history and tradition,” he said.

“Expectations from the school and community are to perform at the level we did. This team set school records and top 10 state records,” Volarvich said.

The Scrappers opened the season at home Labor Day weekend with a 32-31 win over the Hope Bobcats. They went on the road to defeat De Queen and Watson Chapel to go 3-0 in the non-conference portion of the schedule.

From there, the Scrappers went 7-0 in District 7-4A with wins over Arkadelphia, Fountain Lake, Waldron, Ashdown, Mena, Malvern and Bauxite. The playoffs included victories over Crossett, Shiloh Christian, Warren and Pea Ridge, setting up the Dec. 12 championship game against Prairie Grove at War Memorial Stadium in Little Rock.

“It was a great game,” Volarvich said of the title match, a 39-20 Scrapper victory. “To become the only 15-0 team in the state and have a perfect season is something everybody shoots for but rarely happens. A lot of people never get to play in a championship game, much less top it off with a 15-0 season.”

Going into the game with Prairie Grove, “I thought we had a good chance. We knew we could move the ball offensively. We shot ourselves in the foot a couple of times, but they never really stopped us. The thing that worried me was that Prairie Grove is a good team offensively themselves. I was worried that we couldn’t let the game go the way the second quarter went,” Volarvich said. The second quarter saw the Tigers fight back from a 7-0 deficit to lead 20-19 at halftime.

In the second half, “We had to either get some turnovers or some three-and-outs to win. It was more than adjustments at halftime” that held Prairie Grove scoreless for the final two quarters. “We came out to play. We had a couple of misalignments in the first half. We corrected them” and held the Tigers to 89 yards total offense.

“I give the credit to the kids playing hard in the second half,” Volarvich said. Quarterback  Leonard Snell “did what he’s really capable of every game. Going in, we knew we’d rely heavily on him, and we jumped on his back.”

Snell responded by scoring 6 touchdowns, a record in the state championship game. He was named the Most Valuable Player of the title game. Snell was also named the Farm Bureau Class 4A Offensive Player of the Year.

“Snell is a great competitor. He wasn’t going to let us lose,” Volarvich said. “He was excited about the record. We knew going into the game that he would have the opportunity to do it”

The offensive and defensive lines “did a great job” against Prairie Grove, Volarvich said.

“Snell will tell you that it’s not possible without the other guys. It was a great team win.”

Game highlights abounded, perhaps none bigger than a school record 68-yard punt by Gabe Moorer in the third quarter.

“That flipped the field,” Volarvich said. “Gabe’s done a good job all season.”

The punt came after a touchdown run by Darius Hopkins was called back on a penalty and the Scrappers found themselves deep in their own territory. Moorer’s punt moved the ball from the shadow of the Scrappers’ goalpost to inside the Prairie Grove 40.

Moorer punted twice against the Tigers. The record-breaker “was a huge factor in the game,” Volarvich said.

As the Scrappers moved the ball against Prairie Grove in the second half while stopping the Tigers offensively, fans began to see that the championship trophy was in Nashville’s grasp.

For Volarvich, “I realized we had it won when Snell scored the last touchdown. We led by 12 points with 9 minutes left. It was fourth down for Prairie Grove, and we got a stop on the 5-yard line. With 9 minutes left, it could still go either way. They have an explosive offense.”

Like the rest of the season, the championship game flew by for Volarvich and his team. “I probably didn’t spend time to enjoy the after-game. I was making sure the team’s meal was ready on the bus, keeping up with kids who checked out to ride with their family, making sure the locker room was picked up. I might be in 1 picture with the trophy. I was trying to get things done. That comes with it.”

The Scrappers will start offseason when school resumes Jan. 4 after the Christmas break. Along with weights and other aspects of offseason, the program will also include team building and competition-based leadership work, Volarvich said.

Volarvich did take a break this week before the next whirlwind starts in January. He and his family left Sunday for Branson to take in some of the shows and other attractions at the Missouri tourist spot.

After all, “I have a life out of football as well. I’m a husband and father.” 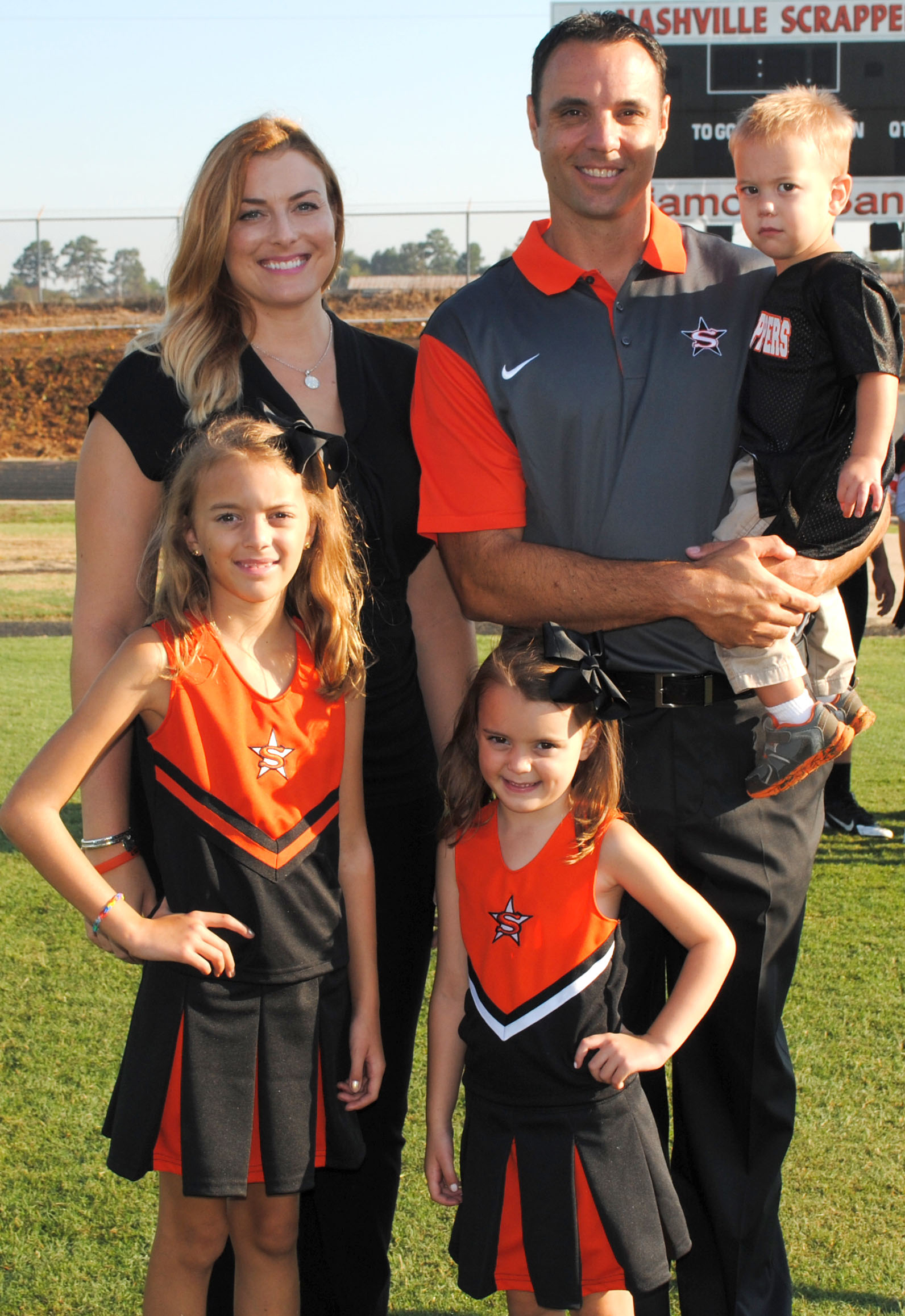