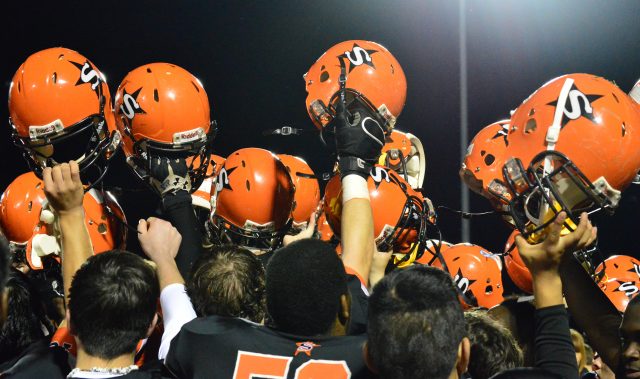 Orange and black will cover the field at Warren Friday night as the Nashville Scrappers  (12-0) and Warren Lumberjacks (10-1) meet in the quarterfinals of the Class 4A state playoffs. Kickoff is set for 7 p.m.

Nashville holds a 3-game winning streak over Warren and leads the series all-time 4-3.

The last meeting for the two teams was in 2007 when the Scrappers defeated the Lumberjacks 49-39 at Warren.

In 2006, Nashville stopped Warren on a 2-point conversion attempt to win the state championship at War Memorial Stadium.

The Scrappers advanced to the semifinals by defeating Shiloh Christian 48-23 last Friday at Scrapper Stadium. Warren took a 35-34 win over Pottsville.

Nashville is ranked second in Class 4A by the Arkansas Democrat-Gazette. Warren is third. Dardanelle is the top-ranked 4A team.

Warren is “really solid. They’re coached very well. They’re the defending state champions,” Coach Mike Volarvich said. “They’ve won a bunch of games the last couple of years. They have a really strong program. It will be a tough game.”

The Lumberjacks’ running back has rolled up nearly 2,000 yards for the season, Volarvich said.

The quarterback “operates the offense very well. He does a really good job.”

The Scrappers must “play solid defense. We have to limit their running game. Their running back kind of starts their offense. We can’t give up the big play.”

On offense, “We have to continue to score. Don’t turn the ball over. It looks like it will be a wet game. We have to do a great job holding on to the ball,” Volarvich said. “We have to get points on the board.”

The Scrappers are having a normal week of practice, Volarvich said, except for the actual time they begin. Monday was close to routine with a 1 p.m. start. Practice started at 9 a.m. Tuesday and today (Wednesday). “We’ll follow the same routine, just do it in the mornings.”

The winner of Friday night’s game will host the winner of this week’s match-up between Central Arkansas Christian and Pea Ridge Dec. 4 at 7 p.m. Other quarterfinal games include Dardanelle/Arkadelphia and Star City/Prairie Grove.

Nashville will offer fan buses to Warren. Those who would like to ride should contact Athletic Director James “Bunch” Nichols.