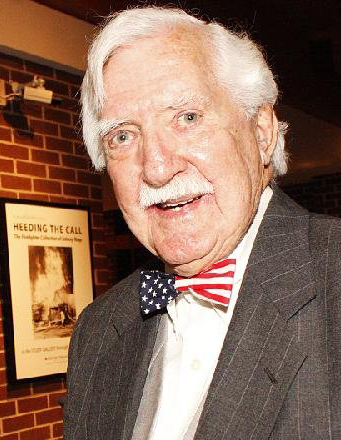 Editor’s Note: Local historian Parker Westbrook passed away Thursday, Nov. 19 in Little Rock at age 89. The following is an article which ran in an October, 2007 issue of The Nashville Leader when Westbrook dedicated the Lucille and Parker Westbrook Arkansas and Genealogy Collection to the Arkansas Studies Institute.

During a ceremony held Oct. 2, the Westbrooks took their place in state history with the dedication of the Lucille and Parker Westbrook Arkansas and Genealogy Collection.

The collection will be housed in the new $20 million Arkansas Studies Institute, a joint project of the Central Arkansas Library System (CALS) and the University of Arkansas at Little Rock.

“As a tribute to Parker and his sister for all they have done for the cause of Arkansas history, we are naming our book collection in their honor,” said Bobby Roberts, CALS director. The collection now has about 24,000 volumes and Parker has created an endowment to support the collection, and those proceeds will be used to add more books in honor of the Westbrooks, Roberts added.

The Westbrook collection consists of three parts: the first part is the material belonging to Lucille and includes a wealth of genealogical sources especially in Southwest Arkansas. “However, the most important part of that collection is upwards of 3,000 historic photographs of the same area,” Roberts said. “Most of these are particularly important because they are identified as to time and place. It is one of the best photographic collections on Southwest Arkansas that I have ever seen.”

The second part relates to Parker’s political career, Arkansas politics, the state’s architectural history, historic preservation and research on Arkansas’s etymology as a word. It was Parker who pushed the possessive case of Arkansas to require an apostrophe “s.” A resolution recently passed by the Arkansas Senate now requires that spelling in all official documents.

Parker worked on Capitol Hill for 26 years, spending 14 years of them working for former Senator J. William Fulbright, before returning home in1975 to work for former Arkansas governor David Pryor.

Pryor once noted that he had only been in office for a week in 1975 when he decided to have Parker on his staff because of his “encyclopedic knowledge” of Arkansas and its people. In 2001, Congressman Mike Ross made an entry to the Congressional Record calling Parker a “national treasure” and referring to him as “Mr. Preservation.”

Parker, born and raised in Nashville, has also been awarded the Arkansas Historical Association’s Endowed History Award and was recognized in 1986 as Arkansas’s Distinguished Citizen for his involvement in volunteerism.

The third part of the Westbrook collection consists of family papers, letters and photographs which meticulously document the Westbrooks’ deep roots in Arkansas.

During the dedication at the Butler Center for Arkansas Studies, several distinguished guests stepped up to the podium to recognize the Westbrooks including Arkansas Gov. Mike Beebe, Attorney General Dustin McDaniel, former Senator and Governor David Pryor, cousin and noted Arkansas teacher Annice Steadmon and Louie Graves, longtime family friend and publisher of The Nashville Leader.

Graves, who called himself “Parker’s personal newspaper publisher,” assured those in attendance that the Westbrook collection is undoubtedly error-free.

“It was an honor to take part in this special event for Parker and Lucille,” Graves said. “I’ve known and worked with them as long as I can remember.”

Several area residents journeyed to Little Rock for the special dedication including friends David and Linda Rauls of Nashville and Marilyn Walker, Dottie Turner and Dewayne and Francy Gray, all of Murfreesboro.

“Parker is a special friend to me. He never meets a stranger, is a great promoter of Arkansas, and he is surely the state’s best storyteller,” said Roberts. “Parker is a real Arkansas gem.’

Federal Judge Bill Wilson of Little Rock, a longtime friend of Lucille’s because of his connection genealogically to Southwest Arkansas (his parents were early school teachers in this area), planned to “remark” but was delayed due to an ongoing trial.

Parker said he was “highly honored” and flattered by the collection’s dedication but was most surprised by the creation of a permanent book fund named in his honor proceeds for which will be used to purchase material for the collection.

“It’s hard to believe that more than 300 people know something I didn’t,” Parker told The Nashville Leader.

Parker also takes great pride and satisfaction in knowing his sister’s legacy as well as her collection will be available for future generations.

“Lucille’s happiness would be based on the fact that all her material will be well-preserved and protected,” he said.