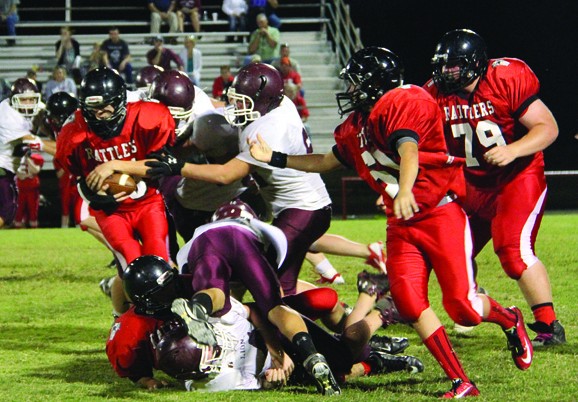 MURFREESBORO – The Mount Ida Junior Lions jumped out to a 30-0 lead in the first quarter and never looked back as they leaped past the Murfreesboro Junior Rattlers last Thursday.
Mount Ida dominated the game, holding Murfreesboro to negative four yards offense while wracking up 239 yards of offense in the win.
Ten different Junior Lions had an opportunity to contribute to the ground game. Jathan Dillon led the Junior Lions with three carries for 82 yards, followed by Jonathon LaGrange with three carries for 37 yards and a touchdown. Hunter Davis had a carry for 19 yards and a score, followed by Gage Dyer with two carries for 14 yards and a touchdown.
Tyler Hamilton had four carries for 10 yards and a score, while quarterback Cade Jackson had two carries for six yards and two 2 point conversions. Jorge Lopez had one carry for three yards and a 2 point conversion, followed by Fisher Davis with three carries for six yards.Austin Cooper had a carry for three yards and Luke Fiorello had one for a yard.
Jackson was 3-3 in the air for 58 yards. Dillon had two catches for 35 yards and a 2 point conversion and Hunter Davis had a catch for 23 yards.
Murfreesboro started the game with the ball on their own 38, but the Lion defense forced a punt on a fourth and 19 from the 29.
Mount Ida took over on their own 45 and needed only two plays to put the first points on the board with a 19 yard run by Hunter Davis. Cade Jackson called his own number on the 2 point conversion and the Lions led 8-0 with 5:15 to go in the first quarter.
The Rattlers found themselves in a fourth and long situation again and were forced to punt from their own 22 yard line. Gage Dyer fielded the punt at midfield and raced 50 yards for a score to give the Lions a 14-0 lead with 3:35 to go in the opening quarter.
Oscar Pinedo ended the Rattlers next series with a fumble recovery on the Murfreesboro 33 yard line. Jackson connected with Jathan Dillon on a 32 yard pass play and Dyer punched it in for the scored one play later. Jorge Lopez ran in for the 2 point conversion to lift the Lion lead to 22 with 1:57 to go in the quarter.

The Lions continued to dominate, forcing a fumble on the ensuing kickoff which was recovered by Jackson. Three plays later Jonathon LaGrange bulled his way in from one yard out for the fourth Mount Ida score of the quarter. Jackson scored on the 2 point conversion to give the Lions a 30 point lead with just 14 seconds left in the first quarter.
The Rattlers luck didn’t improve in the second quarter with the Lions ending Murfreesboro’s first series of the quarter with a pick six.
Murfreesboro dropped back for a pass on third and 16 from their own 22. Tyler Hamilton darted in front of the intended receiver to pick off the pass. He then went 35 yards for the score. Jackson and Dillon connected on the 2 point conversion to give the Lions a 38-0 lead with 6:48 to go in the first half.
The final score came at the end of the third quarter when Hamilton went five yards for a touchdown.
The Lions held on for the 44-0 win.
Mount Ida moves to 5-1 on the season and 3-0 in conference play. The will host Springhill Thursday. There will not be a seventh grade game and the junior high game will kick off at 7 p.m.