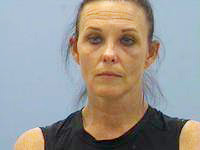 NEW HOPE – The Howard
County Sheriff’s Office along
with the South Central Drug
Task Force and the Arkansas
State Police executed a Search
Warrant at Stanley Bailey’s,
46, resident on Tollett Road in
New Hope. This was a result
of an investigation by the
sheriff’s office, task force and
state police. Officers found
methamphetamine, pills, and
firearms at Bailey’s house. As
a result he is being charged
with Delivery of Controlled
Substance (meth); Possession
of Controlled Substance
w/ purpose to deliver (meth); Simultaneous Possession
of Drugs and Firearms. Bailey has a $50,000
bond set at this time.
A simultaneous search was conducted by the
sheriff’s office and the Department of Community
Corrections at Bob Bailey’s residence located on
Tollett Road, near Stan’s house where Amanda Jill
Sharp was arrested for a warrant issued involving
her recent arrest. No bond had been set for Sharp
at this time