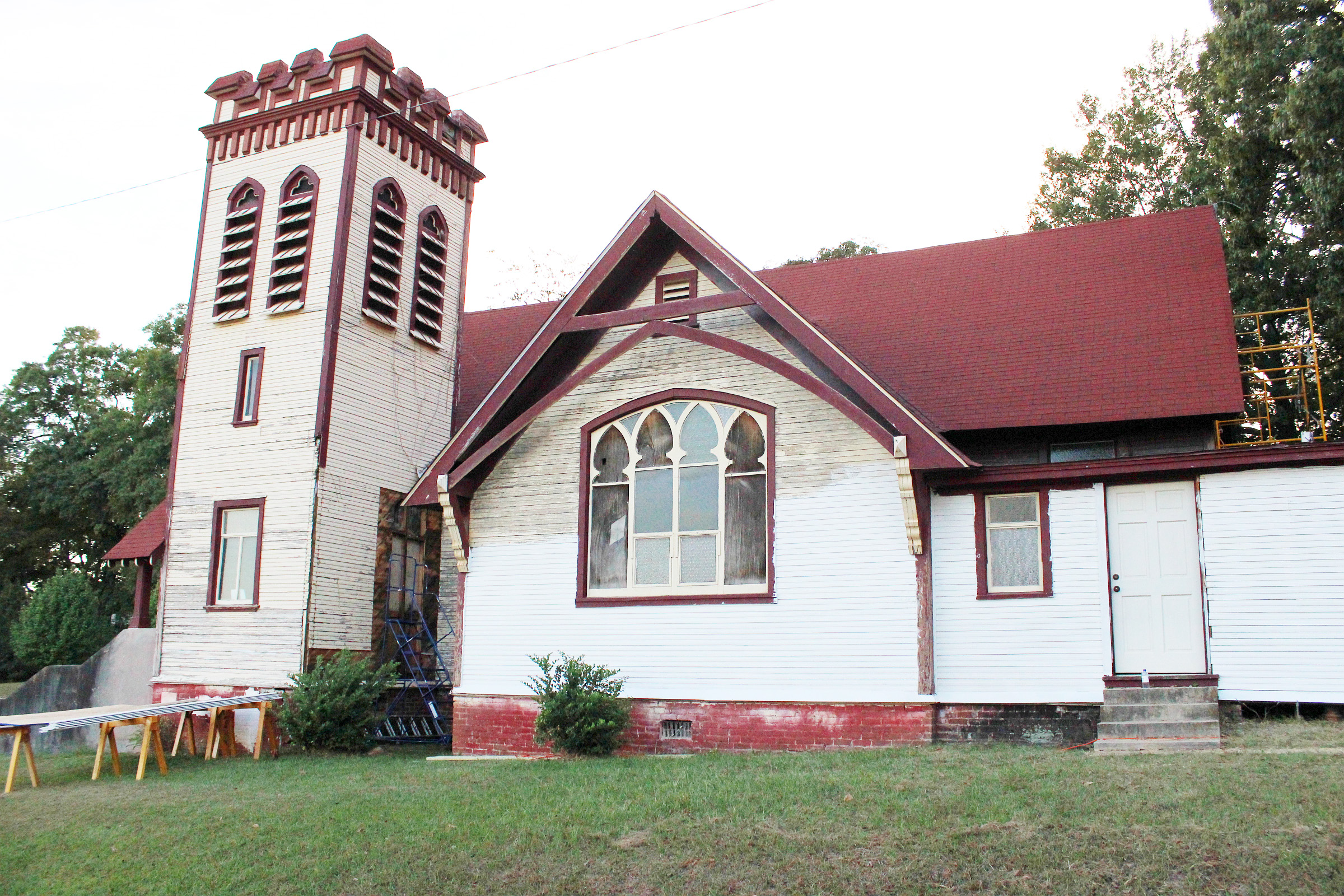 JONATHAN CANADAY
SOUTHWEST ARKANSAS RADIO
NASHVILLE – Restoration
work on the Howard County
Museum has expanded to several
projects and local residents
will start to see some major
changes to the exterior of the
building. Howard County Historical
Society President Freddie
Horne says the work is part
of a $20,000 grant received
from the Arkansas Department
of Heritage. Volunteers have
completed putting primer on
two sides of the building and
are in the process of rebuilding
a section of the Bell Tower wall
and replacing damaged siding.
Horne says there has been
some concern about the colors
of primer being used. “We have
been using both tan and white
primer. Once the building is
ready to be painted, the original
colors of light yellow with a
barn red trim will be used.”
The museum has been inspected
by both an architect and two different foundation
companies, including Olshan Foundation
Repair and Cornerstone
Foundation Repair of Arkadelphia,
who determined that the
former church is structurally
sound. The building foundation
did meet approval, however one
additional beam structure will be
added under part of the floor to
help with stabilization. The west
floor beams have previously been
replaced with treated lumber
and will not need to be replaced.
“The architect determined that
pressure caused by the old wood
burning stove flue caused part of
the misalignment in the west wall.
The stove and flue was removed
several years ago and that side of
the building has also been found
stable,” Horne said. All of the seals
along the west wall have been replaced
with treated lumber. Horne
says the findings are great news.
“The historical society will save
thousands of dollars because the
foundation is in good shape.”
Work has started on the east
side of the museum, including the
bell tower. Bad sections of siding
are being replaced and extra studs
will be added to a damaged section
of the tower. A new door has
been installed at the rear entrance.
Exterior scraping and priming will
continue. Other projects have
included removing old wiring
and cleaning out the attic. Plans
are to install new wiring through
out the building and install a 200
amp breaker system that meets
current electrical code. Interior
work has been put on hold at this
time to take advantage of the good
weather needed for exterior wall
repair. Local craftsmen have been
contacted about other repairs need
on the Gothic trim.
Horne says one of the last item
to be addressed with grant funding
will be the museum’s windows. To
keep them from being damaged
while making exterior repairs and
painting, new windows will not
be installed until all other exterior
work has been completed. Several
residents have donated money
to have the windows replaced.
Sponsorship of a new heat and air
system is being sought.
Membership forms can be
picked up at the radio station or by
contacting board members Freddie
Horne, Scott Horne, Jonathan
Canaday or Susan Nannemann.
The annual membership is $20 per
person or $50 for an entire family.
Donations and memorials may be
made to the Howard County Historical
Society, which is a non profit
organization, at HCHS, PO Box 555,
Nashville, AR 71852. Your support
is greatly appreciated