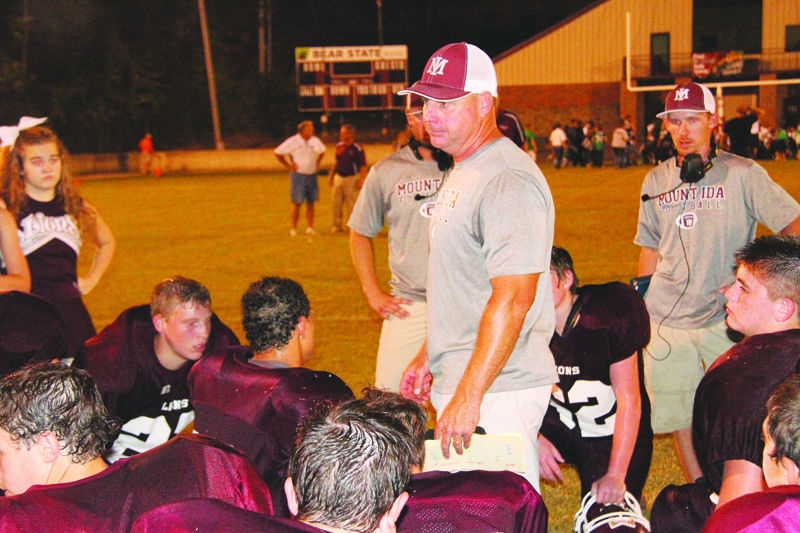 A streak that has lasted for more than six years came to a screaching halt last Tuesday as a Danville Little John trotted across the goal line in double overtime, earning them a 26-20 victory over the Mount Ida Junior Lions. The win over Mount Ida was the first lost ever for the ninth grade Lions.
“The streak”, as it had come to be called in Mount Ida, ended with their 60th game. After Tuesday night’s game they sit at 1-1 on the season and 58-1-1 for the entirety of their career.
The Little Johns opened the game with a bang, taking the opening kickoff 80 yards for a touchdown. They were successful on their two point conversion, giving them an early 8-0 lead with just 20 seconds gone off the clock.
Colton Yates returned the ensuing kickoff just across midfield to the Danville 47 yard line. Five plays later Gage Dyer broke loose for a 31 yard touchdown run. He scampered in for the two point conversion to knot the game up at 8 with 5:28 to go in the first quarter.
Danville started their next drive on their own 45 yard line. The Junior Lions defense struggled to find a way to stop the powerful backs of Danville. The Little Johns only needed six plays to reclaim the lead thanks to a 20 yard touchdown reception at the 3:30 mark in the first quarter. The two point conversion failed.
The Junior Lions started their next series on their own 40 yard line and moved across midfield on a 17 yard run by Dyer. Jonathan LaGrange bulled his way to the 31 and eight plays later LeGrange fell across the goal line to tie things up once again. The two point conversion failed and the score sat knotted up at 14 with 6:32 to go in the first half.
The Little Johns threatened late in the second quarter as they moved the ball to the one yard line. Danville fumbled the snap on a fourth and goal and Dyer fell on the ball to give the Junior Lions possession on their own four yard line.
Mount Ida moved the ball to the 29 yard line, but the clock ran out before they could mount much of a drive.
The Lions opened the second half with the ball on their own 38 yard line. Quarterback Cade Jackson led his team on a 10 play drive to the Little John 10 yard line. Their hopes of capturing the lead ended with a fumble on the 12 yard line.
Defense ruled the fourth quarter with the game ending in regulation time tied at 14-14. The coaches started to line up their players for the customary handshake when the referees waved them to their respective sidelines. The referees informed the coaches that a new rule enacted by the AAA this year calls for overtime for nonconference games.
The Little Johns got first possession in the first overtime and needed only two plays to score. The two point conversion failed and they held a 20-14 lead.
Mount Ida made the most of their overtime possession, scoring on a fourth and one on a quarterback keeper. The two point conversion failed and both teams prepared for a second overtime.
Mount Ida got first possession in the second overtime. The Junior Lion offense struggled to gain positive yardage and ended their possession with a fumbled lateral on a fourth and 14.
Danville moved to the five yard line thanks to a personal foul called against Mount Ida. Two plays later they scored on a four yard run to win the game.
Coach Mike White stated after the game that although you never want to lose, he was kind of glad the streak was over.
“It’s just too much pressure on these ninth graders.” He explained.
Gage Dyer led the Junior Lions in the loss with 19 carries for 150 yards, a touchdown and a two point conversion.
Jonathan LaGrange had 21 carries for 86 yards and a touchdown, while quarterback Cade Jackson had five carries for 42 yards and a score. Colton Yates had two carries for one yard.
“The Streak” started when the ninth graders were in third grade. Their winning streak ended last year with a 14-14 tie with the Danville Little Johns, but they were able to hold on to a streak that consisted of games without a loss until last week.