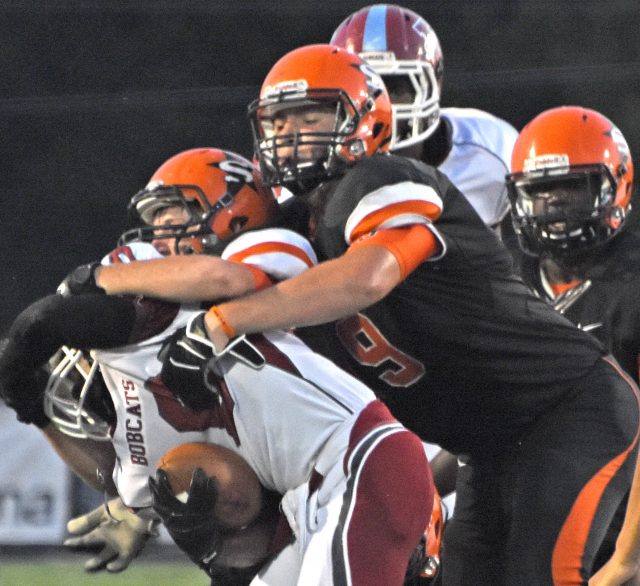 The Nashville Scrappers picked up their first win under Coach Mike Volarvich Friday night with a 32-31 decision over the Hope Bobcats in the season opener at Scrapper Stadium.

With the victory, the Scrappers (1-0) moved up one spot to number 4 in the Arkansas Democrat-Gazette Class 4A poll. They are ranked first in 4A in some of the other polls around the state.

“It’s always good to get a win,” Volarvich said. “The game was a little bit sloppy. Our guys overcame some poor coaching on my part. They weren’t as ready as they needed to be, but they competed well.”

The Bobcats (0-1) responded with a TD of their own, and the game was back and forth the rest of the way. Versatile senior McTelvin Agim led the Bobcat attack, seeing action all over the field on defense, offense and special teams. Agim verbally committed to the University of Arkansas Saturday afternoon.

The Scrappers held a 3-point lead in the fourth quarter before the Bobcats forced a safety. Nashville kept Hope out of the endzone the rest of the game for the 32-31 final.

Volarvich said the Scrapper defense “came on in the second half. We had our backs against the wall for a while. We came out fired up after halftime.”

The Scrapper offensive line “played well. We rushed for over 350 yards. Reviewing the film shows we were good up front.”

Volarvich said the Scrappers “probably had six plays that we were one block away from a touchdown at the wide receiver position. We will get that cleaned up.”

For the night, the Scrappers put up 452 yards total offense, including 95 passing and 357 rushing.

Nashville recorded 15 first downs, with 18 for the Bobcats.

Snell completed 5 of 18 passes for 95 yards, with 1 touchdown and an interception. He was the Scrappers’ leading rusher with 18 carries for 147 yards.

Trent Harris was next with 93 yards, followed by Dea’jeon Armstrong with 75 yards and Darius Hopkins with 46.

Armstrong was the leading receiver for Nashville with 2 catches for 54 yards. Hunter White had 3 catches for 41 yards and a touchdown.

Scrapper touchdowns came from Snell and Armstrong in the first quarter, Hopkins and Harris in the third and White in the fourth.

Defensively, Billy Stewart was the leading tackler with 9, followed by Austin Gibbs with 7, Mace Green with 5, Terell Grundy with 5, Lee Scroggins, Marquell McFalls, Tyler Hanson and Charles Furr with with 3 each, Ashton Nelson and Shundell Scott with 2 each, and Alex Berruquin, Harris, Hughes, Curtis Myers, Garrett Gordon and Jarvis Holmes with 1 each.

Gordon led in assists with 9, followed by Furr, Nelson and Stewart with 6 each.

Nashville and De Queen will carry 1-0 records into Friday night’s conference game at Leopard Stadium. Kickoff will be at 7:30 p.m.

“De Queen is much improved from what I’ve seen of the film from last year. They play extremely tough,” Scrapper Coach Mike Volarvich said. “They have good size. The kids play hard. They’re physical.”

The Scrappers “worked on our base stuff” during practice Labor Day afternoon. “We have a general idea of what De Queen will want to do. We’ll introduce what we want to do” during the remainder of the practices leading up to Friday.