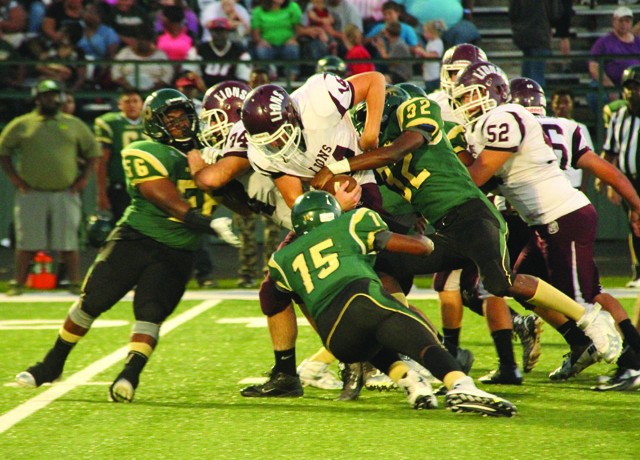 MINERAL SPRINGS – The Mount Ida Lions were able to overcome a very good Mineral Springs defense to earn a 41-0 road victory.
The Hornets were able to hold Mount Ida to one touchdown in the first quarter. However, the Lions were able to take a 28-0 lead by the half. They added 13 points in the third to round out the scoring.
Despite the sluggish start, Mount Ida was able to amass 508 yards of offense on 66 plays.
Three Lions recorded at least 100 yards on the night. Cody Robertson had 15 carries for 125 yards and three TDs, teammate Jesse Lowry had 14 carries for 100 yards and two touchdowns, and T.J. Wilson had five carries for 100 yards. Caleb Jones had 11 carries for 60 yards and a score.
Cade Helms had seven carries for 44 yards, followed by Hayden Bishop with four carries for 39 yards, and Trevor Fryar with two carries for 11 yards.
T.J. Wilson was three for eight in the air for 29 yards. Lowry had two catches for 28 yards and Robertson had one catch for a yard.
The stingy Mount Ida defense held the Hornets to 85 yards of offense. As a team they had 20 carries for 42 yards and Levin Thornton was 6-20 in the air for 43 yards.
Ricky Walker led the Hornets with five carries for 20 yards. He also had one catch for six yards. Tre Lacy had two carries for five yards and four catches for 25 yards. Octavian Ceasar had six carries for 14 yards, and Levin Thornton had one carry for four yards. DeShawn Compton had four carries and Colton Strode had a two. Devin Greenlee had a catch for 12 yards.
Mineral Springs recieved the opening kickoff and returned it to their 43 yard line, but was forced to punt on fourth and 12.
Mount Ida started their first series on their own 26 and quickly moved into Hornet territory. The Hornet defense stood strong. A sack by Ricky Walker, KeShaun Davis and Hunter Hawthorne forced the Lions into a fourth and 15 situation. The Lions faked the punt with a run by Jones. A lateral to Anthony Spurling helped the Lions to a few more yards, but it wasn’t enough for the first down.

The Hornets were able to move the ball to midfield but failed to cross into Lion territory. A punt gave the Lions the ball on their own 43.
Mount Ida’s offense began to find their way, launching a 10 play drive that ended with a 10 yard touchdown run by Jesse Lowry. Tyler Allenbrand’s PAT was good and the Lions took a 7-0 lead with 1:21 left in the first quarter.
The next two Lion series ended in touchdowns.The second touchdown capped off a seven play drive thanks to a three yard run by Cody Robertson at the 10:08 mark in the second quarter. The next drive lasted eight plays and ended with a four yard touchdown carried by Jesse Lowry at the 5:12 mark in the second quarter. Both of Allenbrand’s PATs were good.
Mount Ida threatened in their next series, but the Hornets were able to force the Lions to turn the ball over on downs with 2:26 to go in the first half. Unfortunately the Hornet offense failed to capitalize offensively and were forced to punt from their own 39.
The Lions took over on the Hornet 13 thanks to a blocked punt by Jones. Robertson took the ball the distance on the first play of the series to give The Lions a 27 point lead. Allenbrand’s PAT was good to give the Lions a 28-0 lead with 1:42 to go in the half.
Mount Ida opened the second half with an eight play drive that ended in a three yard run by Robertson to give the Lions a 34-0 lead with 8:51 in the third quarter.
Jones was responsible for the final score of the game with a four yard touchdown run at the 5:56 mark of the third quarter. Allenbrand’s PAT was good to account for the final point of the game.
Mount Ida moves to 4-0 on the season while Mineral Springs falls to 0-3.
Mount Ida returns home to face Murfreesboro and Mineral Springs will travel to Gurdon. Kickoffs are scheduled for 7 p.m.