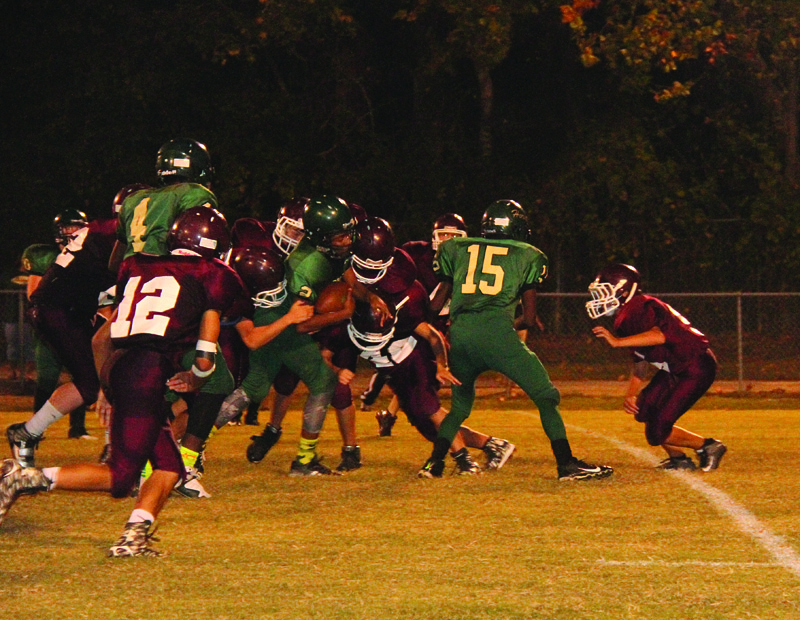 MOUNT IDA – The Mount Ida Junior Lions move to 3-1 on the season and 2-0 in conference play with a 40-0 shutout over the Mineral Springs Junior Hornets.
Mount Ida 281 yards and four touchdowns on 24 carries offensively. They also returned a kickoff for a touchdown. Defensively they recorded a safety and two fumble recoveries.
Jonathan LaGrange had three carries for 118 yards and a touchdowns. Hunter Davis had seven carries for 94 yards and a TD, followed by Colton Yates with three carries for 28 yards, a touchdown and a 2 point conversion. Gage Dyer had two carries for 18 yards and a 2 point conversion. Tyler Hamilton had two carries for 10 yards, Jathan Dillon had three carries for seven yards. Fisher Davis had a carry for three yards and a 2 point conversion. Austin Cooper had two carries for two yards, Cade Jackson had a carry for a yard and a touchdown. Johnny Dyer had a carry as well.
Mineral Springs had nine carries for 37 yards and Peyton Haddan was 2-11 for 29 yards. RayShawn Sanders had a catch for 25 yards and Terrell Fricks had a catch for four yards.
Mineral Springs started their first possession on their own 45 after a couple of kicks that went out of bounds. A pass interference call placed the Junior Hornets on the Lion 40 yard line. Quarterback Peyton Haddan took to the air on a third and nine from the Lion 39. Gage Dyer plucked the ball out of the air on the 30 yard line and raced 70 yards for the first score of the night. Jonathan LaGrange took the ball in for the 2 point conversion to give the Junior Lions an 8-0with 6:35 to go in the first quarter.
The Junior Lions pooched the ensuing kick and recovered the ball on the Hornet 41. Mount Ida only needed three plays to go the distance, scoring on a nine yard run by LaGrange. Colton Yates ran the 2 point conversion in to give the Lions a 16-0 lead with 5:55 to go in the first quarter.

Mount Ida took control of the ball on the Hornet 11 yard line with fumble recovery. Jackson slipped in from one yard out to score with 4:15 to go in the quarter. Dyer scored on the 2 point conversion to give the Lions a 24 point lead.
Mineral Springs bobbled the kickoff and started on their own nine yard line. Another fumble placed the Hornets in the end zone with Treylon Thomas being tackled by Oscar Pinedo, Ethan Winkley and Jorge Lopez for a safety.
The Junior Lions increased their lead to 32-0 with a 13 yard run by Colton Yates at the 2:52 mark in the first quarter.
Hunter Davis raced five yards with 4:50 left in the first half for the final score of the game.
Mount Ida will travel to Murfreesboro Thursday and Mineral Springs will host Gurdon.